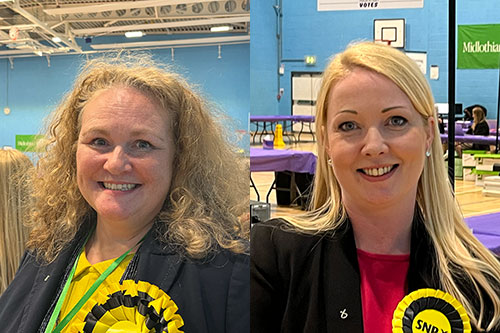 SNP Councillor Debbi McCall has been elected unanimously as the new Midlothian Council Provost. She was nominated for the position by SNP group Leader, Kelly Parry, and seconded by Labour Leader Derek Milligan.

The new Provost was congratulated by outgoing Provost Peter Smaill, who likewise thanked him for his contribution over the last few years.

In congratulating Councillor McCall on her election Councillor Parry thanked both the Labour and Conservative councillors for their support and for working collegiately over the last few weeks.

On acceptance the new Council Leader paid tribute to outgoing Council Leader Derek Milligan and “his absolute dedication” which she said she hoped to live up to.

Derek Milligan then congratulated councillor Parry and said that he was looking forward to working cross-party and would not be using the term “opposition” as he said that all parties needed to continue to work together over the next five years.

Provost McCall made the point that it is probably unique in Scotland that Midlothian Council now has a female Provost, Council Leader, Chief Executive and a gender balanced cabinet.