MPs launch inquiry into “levelling up” the former coalfields 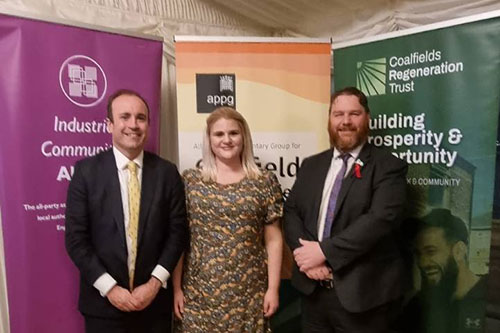 Owen Thompson MP helped launch an inquiry into Levelling Up the former coalfields by the All-Party Parliamentary Group on Coalfield Communities this week.

Mr Thompson, a member of the APPG, has been a vocal supporter of measures to regenerate coalfield communities including leading debate on the potential for geothermal energy production from the former mines.

The Midlothian MP attended the ‘Celebrating the Coalfields’ reception where he discussed how to take the inquiry forward locally, meeting with cross-party politicians, the Industrial Communities Alliance and the Coalfields Regeneration Trust.

There has been progress in regenerating coalfield communities but on most indicators of prosperity and well-being they still lag behind. The inquiry aims to work out what still needs to be done and how, and help set the agenda in the run up to the next general election and beyond.

In order to do this, organisations across the country are being invited to make written submissions. Mr Thompson will be raising awareness and urging local stakeholders in Midlothian to get involved.

The inquiry covers the economy of Britain’s coalfield areas, where once there were more than a million miners, the environmental legacy, the needs of ex-miners and of younger people, the role of government funding, and the cultural heritage of the coal industry.

A 2019 study, The State of the Coalfields, by academics at Sheffield Hallam University, found that the former coalfields have only 55 employee jobs per 100 residents of working age, compared to a national average of 73. It also pointed to average hourly earnings 8-10 per cent below the national average. More than a third of coalfield residents aged 16+ report long-term health problems.

The inquiry’s report is expected to be published in the Spring.

“I am delighted to be involved in this cross-party work to help regenerate coalfield communities across the UK. The pit closures left a lasting legacy of social and economic damage, and while we have many thriving new businesses based in Midlothian there’s a lot more needing done to boost recovery and tackle poverty and inequality.

“There is enormous potential for Midlothian to be at the heart of the green industrial revolution, for example, making use of the geothermal energy trapped in the former mines to heat our homes and businesses. Taking advantage of our old mining legacy to extract heat from the Earth is a tremendously exciting prospect for jobs and the local economy. It just needs the political will to drive things forward.

“If ‘levelling up’ is to be more than just a slogan, it must reach our former mining communities and I’ll be doing what I can to make the case for Midlothian to benefit from any new funds and initiatives that could help boost recovery in the area.”