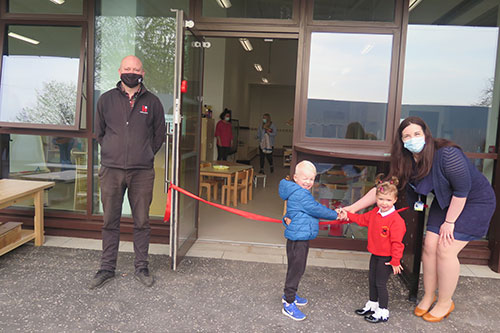 The return to school after the Easter break was all the more exciting for pupils at Danderhall Primary with the opening of their new building.

As well as a new primary school and early learning centre, the £16.78 million new build has a library, leisure centre, cafe and sports pitches, some of which will open next week when coronavirus restrictions ease.

Acting Head Teacher Jennifer Mouat said: “This is a fantastic day for the school and the Danderhall community.

“So much work has gone into creating this modern, exciting education environment so to be able to finally welcome the children into their new classrooms to continue their learning journey is amazing.

“It’s been a challenging time for pupils and staff everywhere because of coronavirus so getting into our new school feels extra special today.”

Main contractor Heron Bros delivered the state-of-the-art building, which sits on the former primary site, and can accommodate 640 pupils and 120 children in its three nursery spaces.

Darcy agreed she was “very excited” to be in her new school.

Elliot said the chance to cut the ribbon was “magic” while Lemuel said he’d been on a tour of the building and it was “pretty cool”.

The redevelopment of the site comes after extensive consultation with local people about preferences for the school.

Danderhall’s budget is £16.784 million, partly funded by £6.2 million of developer contributions, £1.1 million of Scottish Government Early Years grant funding; and with the remainder being funded by the council.