Next phase of work starts in Jarnac Court next week 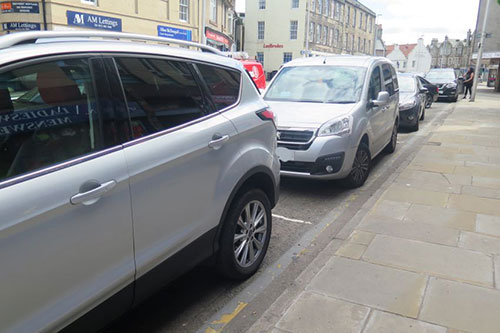 The layby in South Street, Dalkeith, will close for the building works.

Work starts next week on the latest phase of the building work and will last 38 weeks.

In November 2018, Midlothian Council agreed that the upper floor offices at Jarnac Court in Dalkeith, the block occupied by the Continental Cafe amongst other businesses, could be refurbished and utilised for emergency homeless accommodation.

Despite the budget increase, the council is confident that it will still result in an annual saving due to the much decreased bed and breakfast accommodation costs.

This week there have been reports on Facebook that the whole of South Street would be closed for 38 weeks. Midlothian View asked the council to comment on this and a Midlothian Council spokesman said:

“The layby on South Street beside the Continental Café will be closed for up to 38 weeks while the Jarnac Court building is refurbished by our council-appointed contractor. We’d like to reassure residents and businesses South Street will remain open throughout.”

The full designs for Jarnac Court external changes can be seen HERE.

Readers may also be interested in this Midlothian View article from August 2020 Jarnac Court refurbishment costs up by 300%.