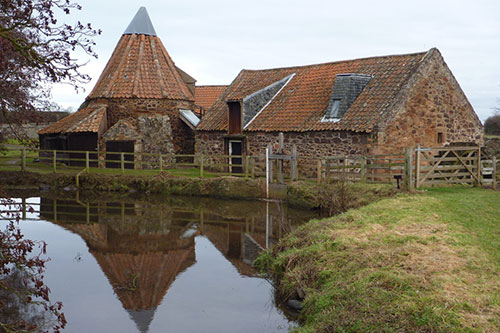 A bid to bring wild salmon back to a stretch of river made famous by hit show Outlander is moving forward.

Work to remove barriers along the River Tyne in East Lothian could open up around 200km of waterways to migrating salmon and sea trout.

The Scottish Environment Protection Agency (SEPA) said the work is one of the largest fishing channel projects it has ever undertaken.

It is targeting disused weirs, once used to divert water from the river to mill waterwheels, and looking at ways to remove them and open up the river to fish.

Work to restore the Preston Mill weir, which has become a tourist attraction since featuring in Outlander, has been carried out already.

The mill and its waterwheel featured prominently in the first series of the American cable show which found international fame for its stars and put the East Lothian location on the international map.

Now work is underway to remove Knowes Weir, less than a mile from the famous landmark, which is 40 metres wide and diverted water to Knowes Mill.

And talks are underway with the National Trust for Scotland, who oversee Preston Mill , over dredging work at the site to further improve access.

Julia MacPherson, SEPA Restoration Specialist said Knowes Weir was a priority as the project moves forward as it is the nearest barrier to the sea.

She said: “SEPA is working closely with partners to improve the River Tyne in East Lothian for migratory fish and bring additional wider environmental improvements to the area in the next few years.

“With several impassable weirs on the River Tyne, the aim is to open up around 200km of habitat for fish such as salmon and sea trout by removing barriers, making the entire river accessible to fish.

“This is one of the largest fish passage projects in Scotland and will benefit both the environment and communities, by reconnecting people with the nature that swims right through their towns and villages.

“We are working to carefully remove most of Knowes Weir to give migratory fish the best chance of reaching suitable upstream habitat.

“Working with the local authority and landowners we are pursuing a design which works for everyone – allowing water to continue to flow through the mill lade preserving its heritage interest, along with interpretation, for visitors travelling along the John Muir Way trail.”

When the project was first put forward SEPA estimated up to 90 percent of the River Tyne in East Lothian was inaccessible to the fish at one time or another.

Alison Baker, director of the Forth Rivers Trust welcomed the latest stage in the project.

She said: ” We hope that this project which started in 2015 will eventually deliver these very important works given the negative impact these weirs have on our iconic species including Atlantic salmon, resident brown and sea trout and European eels.

“Atlantic salmon are in crisis with population levels crashing and eels are endangered and in decline. We urgently require action from SEPA to resolve long term issues to support this fantastic river for communities and wildlife.”

The National Trust added it was also working with SEPA on the project.

A spokesperson said: “The National Trust for Scotland is currently working closely with SEPA to arrange dredging of the lade adjacent to Preston Mill.

“There are no other proposals regarding the weir at Preston Mill as works were carried out previously to ensure it is passable for migratory fish.”