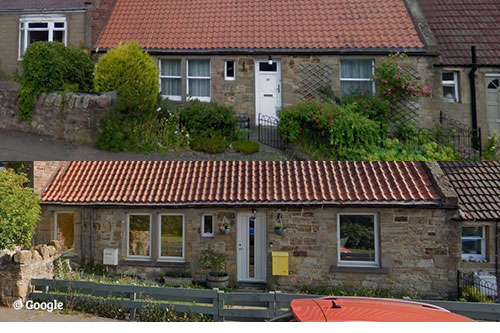 Planners used Google maps to view how the cottage looked in 2008 (top) compared to 2022.

A homeowner faces having to remove replacement windows in his cottage in a conservation village after planners searched Google Maps for old images of his home.

But despite using the same timber materials to replace the windows, planners refused permission after looking at historic Google Map images which showed the design was different.

In a report on the planning application, Midlothian Council planners said the traditional sash and case design should have been replicated in the replacement windows.

And in an unusual move they encouraged the homeowner to consider replacing the timber windows with UPVC alternatives which replicate the old design.

They said: “Google maps shows the previous windows as comprising white framed one over one pane sash and case windows.

“Ideally the windows on the front of the property should be replaced with timber sash and case windows.”

However they noted a number of UPVC windows had been installed on the front of houses in the conservation village after a planning decision in 1996 relating to a home in Pathhead “took the view that white UPVC sliding sash and case windows may be acceptable in the conservation area”.

They said since then UPVC windows have been approved in the two villages telling the applicant “accordingly the installation of high quality upvc framed windows, of an appropriate design, on the application property may be acceptable”.

They said “Whilst the use of timber frames is welcomed in terms of authenticity and sustainability the non-traditional design and method of opening of the windows which have been installed are unsympathetic to the traditional character of the building.”

Planning permission for the new windows was refused.