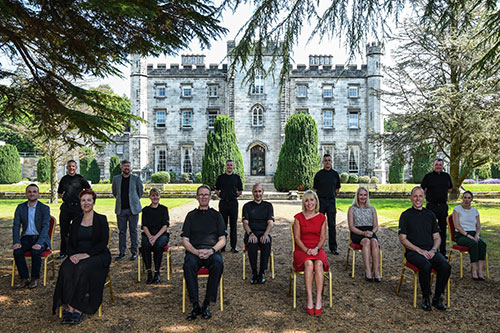 Police Scotland and Public Health Scotland have formalised a new collaboration to address public health and wellbeing in communities across the country.

The first joint approach of its kind in Scotland, is founded on the basis of the two organisations’ shared visions to improving the safety and wellbeing of people places and communities in our country, and creating a Scotland where everybody thrives.

Senior leaders agreed to implement a Collaboration Framework and the first meeting of the joint Executives took place at the Scottish Police College, Tulliallan on Tuesday, 20 July, 2021.

Led by Police Scotland’s Deputy Chief Constable Will Kerr and Public Health Scotland’s Chief Executive Angela Leitch, the meeting set out the key priorities for the collaboration, with a specific focus on mental health and wellbeing, supporting local systems, data and analysis.

The role of public health in policing featured highly on the agenda, with inputs relating to the impact of mental health and wellbeing issues on the two organisations. The public health approaches to addressing societal issues through partnership working were also discussed.

A case study on the importance of supporting local systems was delivered, drawing on experience in the Greater Glasgow area, while the importance of collating and interrogating data to provide an evidence base was featured.

The two organisations are also implementing a learning exchange as part of the collaborative framework with an initial focus on transformation and change, learning from the creation of Police Scotland from its eight legacy forces and national resources.

“This can include childhood trauma experiences, poor educational opportunities and achievement and low household income.

“By working together to address these inequalities, can help to address the root causes of crime, safeguard vulnerable people in our communities and reduce the chance of becoming a victim of crime.

“I truly believe that an improvement in the wider public health of Scotland we can reduce the likelihood of people becoming entrenched in the criminal justice system, improving their life chances and creating safer communities, while also protecting vulnerable people at risk of falling into criminality or becoming a victim. Ensuring people like this are treated humanely is critically important.

“Strengthening and renewing the collaborations between policing and public health will contribute to building stronger foundations for our communities to thrive and help to deliver the shared outcomes of Police Scotland and Public Health Scotland.”

“Together with Police Scotland we are working to address the significant health challenges that Scotland faces. Our partnership framework has therefore been developed to turn our shared vision and purpose into tangible actions – actions that will make a real difference to people’s lives.

“Our existing partnership work already demonstrates the power and potential of this joint public health approach. The ongoing pilot of police officers carrying Naloxone nasal sprays to help people experiencing a suspected overdose, and our work to provide agencies in local communities with real time data on suspected drug-related deaths and suspected suicides, are examples of how we are having a greater impact on population health and wellbeing”.

A Delivery Group for the Collaboration Framework has been set up and will meet regularly to progress the shared aims and outcomes for the project, while seeking to maximise its impact for both organisations.