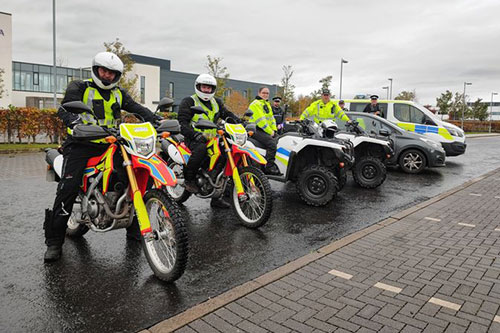 Officers issued with a new forensic tagging spray called SelectaDNA, were deployed for the first time in Midlothian, this is a new tactic for dealing with persons riding motorbikes carelessly and dangerously in Midlothian, and is anticipated will help identify those responsible.

Operation Jewel is the Lothians and Scottish Borders Division’s response to Anti-Social Behaviour involving unregistered off-road motor bike related issues. Officers have also already carried out numerous searches of properties under warrant during which several stolen pedal cycles, various quantities of controlled substances and a stolen off road motor cycle have been recovered.

Do you have any information in relation to persons involved in motor bike related Anti-social behaviour or indeed criminality? Then the Police really want to hear from you; get in touch by dialling 101 and pass on the information for the attention of officers on Operation Jewel.