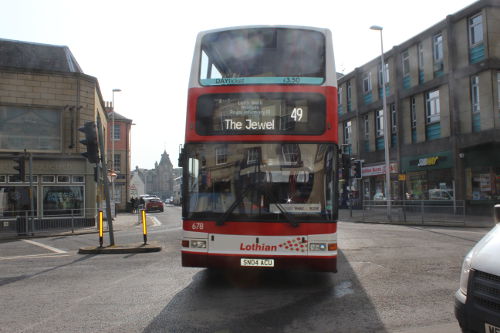 Police sent a decoy bus out at weekends in Midlothian to catch youths who had been targeting local bus services, it has been revealed.

Four youths were arrested following the operation, which was led by Midlothian Community Action Team (MCAT), over two weekends.

Three of them were charged and reported to the Procurator Fiscal for trying to vandalise the decoy bus.

The fourth youth, it has been revealed, was caught switching off bus engines while they were at bus stops.

Details of the undercover operation are revealed in a performance report by Police Scotland to the council’s police and fire and rescue board, which meets next week.

It comes after Lothian Buses was forced to suspend evening services following a string of attacks on its vehicles in March this year.

The report says: “As a result of identified issues with anti-social behaviour and mindless acts of vandalism against LRT buses in Edinburgh, an operation was set up to combat this happening in Midlothian.

“Working with our colleagues in Edinburgh and Lothian Buses, a decoy bus operation was initiated with MCAT officers over two weekends.

“This was extremely successful and led to three youths being charged and reported to the Procurator Fiscal for attempting to vandalise the decoy bus.

“A further youth was charged after being identified for switching off bus engines whilst they were at bus stops.

“MCAT continue to police this anti-social behaviour proactively and effective partnership working has de-escalated the issue and lessened the chances of transport services being withdrawn in future.”

The report reveals that anti-social behaviour incidents in Midlothian rose by 32 percent in 2020/21, although it points out that reports relating to potential lockdown breaches were included and contributed to the increase.

It said that in particular issues were raised in Dalkeith, where MCAT intervened as youth gatherings increased.

It adds: “Dalkeith has recently seen an increase in youths loitering and through intervention from MCAT and youth-related initiatives, quantities of alcohol have been seized and persons reported to the Procurator Fiscal and Children Panel respectively.”

A crackdown on drugs dealers has also seen the number of recorded incidents in Midlothian reach a five-year high during the pandemic.

It was a 40 per cent increase on the number of supply incidents detected in the previous year and topped the five-year average of 70.

The report also reveals that the number of drugs production sites detected nearly doubled year on year, with 18 recorded incidents of ‘Production, Manufacture or Cultivation of Drugs’ reported to police.

The report says: “It should be highlighted that the global pandemic and various lockdown levels have imposed some limitations on drug initiatives and the enforcement of drug warrants.

“However, officers have taken proactive and positive action whenever national public safety guidelines have allowed.”

Violent crime fell, with the number of assaults recorded down, while the number of robberies reported in the last quarter of the year rose from 12 in the previous year’s period to 19.