Politics is for young people! 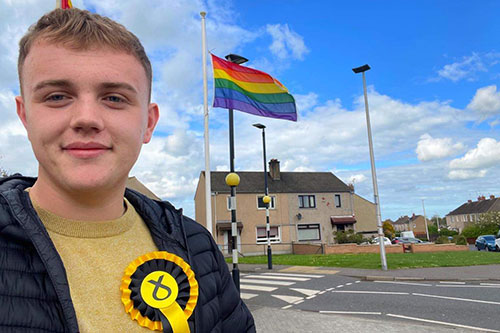 This View has been written by Connor McManus, Deputy Provost Midlothian Council and Councillor for Penicuik (SNP).

What does the future hold? The question I regularly asked myself growing up, is it within the UK or as an independent country? I think we all know where I stand on that question now. However, I come from a traditionally Labour family, my grandfather was a Miner in Bilston Glen. Labour was the party my family had always supported, until I began to question why we blindly voted Labour every Election Day, and the answer tended to be ‘because that’s just who we vote’. Is that really political representation? We vote for Labour because of the political climate in the 1980s? It never sat well with me.

The Tories continue to decimate Scotland, we are a nation of proud people, and I count myself as a proud and liberal Scot. When I turned the age of 19, I started to ask myself, how we can allow ourselves to be in a union that continues to propel us towards irreversible conservatism? We can’t. Independence is the only way that we can be a proud European nation again, join our Nordic neighbours and become a respected independent country who get the government we vote for.

As a young Scot, my future, like many others my age, is uncertain. But with independence, we can chose the future we want, at EVERY election. We can chose to steer our country into our collective will and be proud of the place we call home. This isn’t about party, politics or the person that is the face of the yes campaign! It is about our future, our right to democracy and our right to be the country that we want to be. Since being elected as Councillor for Penicuik in May this year, I’ve also been appointed as Depute Provost and Equalities Champion for the Council. These are roles I take really seriously and I carry them out with passion, I believe our voice has to be heard, I didn’t get a vote in 2014, and neither did many of my peers.

Liz Truss and her newly forming Cabinet fear the prospect of an independent Scotland, hence regularly moving goalposts and scaremongering. We have the ability and determination, the people of Scotland are sovereign and we will not be ignored. Truss and her colleagues are quite literally rewriting our rights as I write this, our equality and access to healthcare are up for grabs, we are progressive and we should not allow the Tories to plunge us back in time, and take away rights we have fought for.

My goal in politics is to show that young people can contribute to political thoughts and put them into practice. I care about where we will be in 2040. Will my peers be able to own a home? Will we be represented fully by the people we elect?

I look forward to the campaign for Scotland’s independence, we are ready! And the Tories know it.