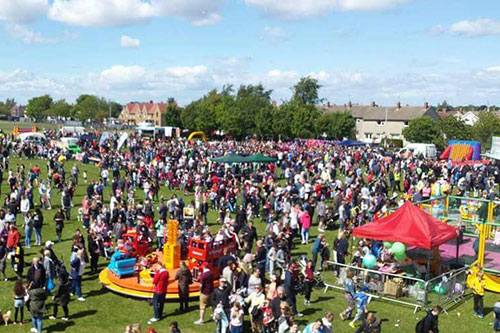 The Poltonhall Galaday Committee have taken the difficult decision to postpone the Galaday this year.

A statement from the committee said:

“The reason for not holding the gala day this year is that the Covid19 restrictions prevented more than 500 people from gathering at the start of the year. As some of these restrictions were lifted by the Scottish Government, we were still required to implement a track and trace system within Poltonhall Park which was not practicable for the Committee. When finally, these restrictions were removed, and the Poltonhall Galaday Committee met at the end of March, the number of full-time members who attended the meeting had fallen to six. The Committee made the decision that a Galaday could not be organised in the short period of eight weeks with just the members present.

“The Committee comprises of volunteers from the Poltonhall and Bonnyrigg area, who work full time and devote spare time and energy to providing the best gala day for our community, and we feel we could not achieve this year with the time and shortage of people.

“The Committee is still at present working on some smaller projects to be announced soon.

“We would like to take this opportunity to wish the Primary Sevens from our area, who would have represented their schools in the Poltonhall Galaday Royal Court, the best wishes in their senior year and hope they have a successful year and years to come at Lasswade High School and St David’s High School.”

As well as organising the Galaday the committee also organise several winter events for fundraising including the Bonnyrigg Santa and sleigh as well as Bingo and Entertainment evenings.

Each year the Committee invites the local primary schools to send a primary seven Gala Girl and a Gala Boy to represent their school on the Poltonhall Galaday Royal Court. The local nurseries also send a Page Boy and Flower Girl.

The committee are asking for more people from Bonnyrigg and the surrounding areas to assist in being a full or a lay member of their committee. You can contact them at
poltonhall.galaday@hotmail.co.uk and like their Facebook Group Poltohall Galaday Facebook page.