North Bridge, Edinburgh, is inside the proposed LEZ. Photo by Sinitta Leunen

Older vehicles that produce higher emissions are set to be banned from the city centre, with heavy fines for drivers who fail to comply.

Proposals for a Low Emission Zone, designed to tackle air pollution and protect public health, are set to be agreed at a meeting of Edinburgh City Council’s transport committee on Thursday June 17.

Council officers estimate this will affect 16,000 vehicles in Edinburgh, mostly diesel cars. Lothian Buses’ fleet does not yet meet the emission standards, but is expected to reach compliance by the end of 2021.

From 2024, the council will begin using automatic number plate recognition technology to fine drivers who fail to adhere to the restrictions.

The LEZ lies adjacent to the following public carriageways, which are themselves excluded from the scope of the scheme itself:

A spokesperson for Edinburgh City Council said: “An evidence-led approach was taken when appraising the schemes, adhering to the National Low Emission Framework and based on detailed traffic and air quality modelling and data.

“Each option was assessed against a series of principles and objectives including the reduction of harmful NO2 and greenhouse gas emissions and minimising the displacement of traffic as a result of the LEZ.

“If approved, a 12-week public consultation would be carried out seeking views on the preferred scheme.

“This would inform a report back to committee in autumn before the statutory process to introduce the LEZ begins, with the aim of implementing the scheme in spring 2022.”

Work to introduce an LEZ in Edinburgh began in 2018 in line with the Scottish Government’s commitment to implement LEZs in Scotland’s four largest cities – Edinburgh, Glasgow, Aberdeen and Dundee – to tackle air pollution and protect public health.

It was originally intended that LEZs would be in place by 2020 but, due to the coronavirus pandemic, this date has been pushed back to 2022.

Councillor Lesley Macinnes, Transport and Environment Convener, said: “As we approach Clean Air Day, which aims to tackle air pollution and its harmful effects on our health and wellbeing, it’s fitting that we’re progressing our own plans to significantly improve air quality in the city.

“A great deal of analysis and monitoring has gone into the latest proposals for a Low Emission Zone in Edinburgh.

“This takes into account the urgent need to lower emissions for the good of our health, while remaining aware of the impact on local businesses, residents and on traffic patterns.

“We know from our consultation in 2019 that lowering air pollution matters to everyone, so I look forward to hearing from the public on the preferred option, if approved by committee.”

Councillor Karen Doran, Transport and Environment Vice Convener, said: “We have committed to introducing a Low Emission Zone, both under the national drive to implement LEZs across the country but also through the City Mobility Plan, as part of our plans to deliver a more sustainable, environmentally friendly transport future in Edinburgh.

“We will continue to work closely with residents, businesses and stakeholders as we move a step closer to its introduction, ensuring everyone is well prepared for the changes.”

When asked how the LEZ might affect lower-income residents commuting into the city centre for work, councillor Macinnes said: “There is funding available for people from certain categories, and that includes people on certain benefits, and those who are living within 20km of the LEZ.

“If you fall in that category, both in terms of geography and in terms of income and benefits, you can get that assistance to help you make the change and bring it up to standard.

“If you think about the city center, in terms of people going into work, there won’t be that many going in and taking their car into the city centre, so I don’t think there’s going to be quite the level of impact if we’d made it citywide.”

To find out the emissions standard of your car, CLICK HERE 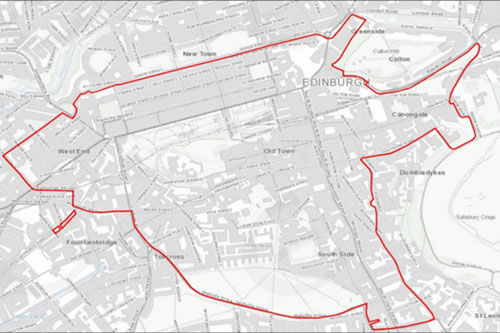 The boundary of Edinburgh's proposed LEZ.