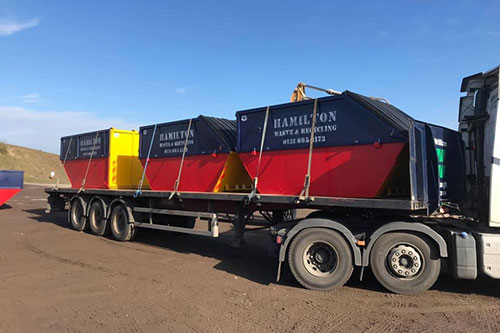 Scotland’s first carbon neutral waste centre has been given the go ahead to operate on Sundays for one year so it can win lucrative new contracts.

Hamilton Waste and Recycling reached its carbon target last month after signing up to Trees for Life to offset the remaining amounts.

Now it has been granted temporary permission to work seven days a week after East Lothian Council was told it was the only way to compete for some contracts.

A virtual meeting of the planning committee heard that the firm’s recycling centre at Smeaton, near Musselburgh, had been operating for seven years but current planning conditions stopped any work onsite on a Sunday.

The company, which employs 95 workers on the site, said operating on a Sunday would allow it to compete for contracts and create up to 20 additional jobs.

`Robin Stevenson, managing director, told the committee: “We are a major employer in the area and Sundays would allow us to recruit even more people and give the local economy an even bigger boost.

“We are pioneers in waste processing…98 percent of all materials that come into our site are kept away from landfill.

“We became carbon neutral last month and have won many awards including Recycling Centre of the Year.”

However the committee heard that ten letters of objection had been lodged over the change of hours and planning officers conceded that a statement in the report that no houses were within 20 metres of the site was “an error” with 12 neighbours identified and notified of the plans.

One neighbour Emma Ferguson urged the committee not to grant the change in hours saying: “I fully support the recycling centre but object to additional working hours on a Sunday”.

She said that while the noise impact might not be high just now plans by the firm to add more sheds and facilities on the site could make it noisier in the future.

Councillor Andy Forrest, who used to be ward member covering the Smeaton site described the Sunday changes as “a step too far”.

However the committee agreed to allow the change for one year only to allow them to review its impact on residents in 12 months time.