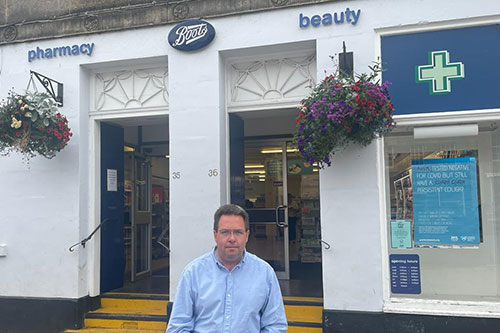 Craig Hoy, a Conservative MSP for South Scotland, has raised concerns about the number of unscheduled and avoidable pharmacy closures that are routinely happening in Midlothian.

He said: “Pharmacies are an important lifeline for so many people who need to collect live-saving prescriptions from their GP.

“But the unplanned closure of a pharmacy creates a significant risk to patient health, and these closures are currently happening with impunity.

“An unplanned pharmacy closure has no effect on Government funding provided to pharmacy to stay open, and many pharmacy closures are the result of major chains choosing to close their doors early in the pursuit of profit.

“This is a misuse of public money and it undermines patient care.

“The current situation is unsustainable and very dangerous for patients who collect life-saving medicine from pharmacies on a regular basis.”

“Frontline pharmacists are extremely concerned about the number of unscheduled and avoidable pharmacy closures that are routinely happening across Scotland, and deny patients access to their medication and vital services such as NHS Pharmacy First, which is designed to allow community pharmacies to give people expert help for treating common ailments such as diarrhoea, allergies and cold sores, along with common clinical conditions such as urinary tract infections (UTI’s), impetigo and shingles without them having to visit their GP practice or local A & E for non-urgent treatment.”

“Every pharmacy closure displaces patients and carers who are unable to access their regular pharmacy to other parts of the system, and these closures cause sudden, unexpected and unnecessary increases in workload at neighbouring pharmacies, NHS-24, GP surgeries, social care services, A & E and all the other out of hour NHS services; as NHS Scotland recovers from Covid-19 all these services are already over-subscribed, and it is crucial that if these are to be protected then pharmacies should not be allowed to close.”

“When a pharmacy business chooses to close, their government funding is not affected, the Scottish pharmacy contract does not allow health boards to recover monies paid out for undelivered services. These decisions are often not taken locally but by head offices based in England with the only possible justification being that of cutting costs and improving profitability. A Saturday closure saves the owner an estimated 8 to 17% in wage costs alone.”

Mr Burney’s letter added that there is a “clear duty on community pharmacy owners to ensure they deliver the terms and services of the arrangements that are in place with the NHS boards to provide pharmaceutical services”.