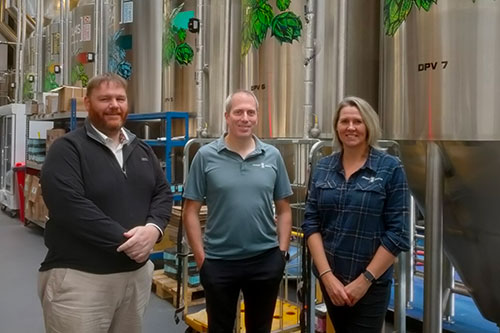 Owen Thompson MP has urged support for the UK’s independent breweries as the cost-of-living crisis threatens to bring widespread closures in the pub and brewery sectors.

Mr Thompson was speaking after a visit to an established local brewery in his Midlothian constituency, Stewart Brewing. Like other breweries across the UK, they report a crippling 300%+ rise in their electricity bills since last year, with predictions of much worse to come over the winter.

Energy price rises also indirectly impact on the cost of materials that require energy to make, such as cans.

Brexit has also contributed to a shortage of equipment such as CO2 and increasing prices of raw ingredients such as grains.

The growing crisis comes as the sector begins its recovery from the pandemic lockdown, with the Society of Independent Brewers (SIBA) reporting an average £30,000 debt for each small brewer, which they have just started to repay.

Uncertainty also remains over the future of Small Breweries Relief (SBR) a tax measure which was introduced 20 years ago and transformed the industry, helping small independent breweries to compete with the big players. This relief is currently under review by the UK Government.

Mr Thompson is leading a debate on the impact of Small Brewers Relief next Tuesday but will also raise the wider cost-of-living issues threatening the existence of this previously thriving sector.

“The cost-of-living crisis, sky high energy bills and the impact of Brexit has combined to create the perfect storm for many small businesses in the UK’s food and drinks sector, including our small independent breweries.

“Midlothian is lucky enough to be home to many fantastic small craft breweries such as Stewart Brewing. Together with the local pubs, they boost the economy, support livelihoods and help build a sense of community. To lose this would be a terrible loss.

“Small breweries also bring jobs in economically fragile, rural areas across the UK. If ‘levelling up’ is more than a slogan, the UK Government must protect measures like the Small Brewers Relief and support small brewers to compete against the big players.

“After the pandemic many small breweries were already struggling on the brink of survival. They are warning that the crisis now is even worse. Immediate action is needed to help with unsustainable energy bills or we will see a tsunami of redundancies this winter.

“They must start with a freeze on energy costs for businesses as well as consumers. They could look at a package of measures such as support to install green energy-saving technologies and provide much-needed certainty over alcohol duties and Small Brewers Relief. It would be madness to hit this important sector when it’s down instead of giving it a hand up.

“It is ironic that Brexiteers like Farage promoted the ‘Great British Pub’ yet it is their policies which are helping make things so difficult for their survival. The issues for small breweries are symbolic of broken Britain.

“Doing nothing will be far more costly than providing the support small businesses need now. I urge the UK Government to get back to work and start to undo some of the damage they have done.”

“It was a great pleasure to show MP Owen Thomson around the brewery. He clearly has interest and the desire to support the craft brewing industry, and we are very grateful for his continuing support over the years throughout multiple crises.

“We are hopeful that Owen’s representation of local breweries concerns will help quickly bring forth successful outcomes for imminent Energy Support policy for SME businesses, a pause and re-think of the currently unworkable and massively costly DRS (Deposit Return Scheme) system, and success in beer duty reform measures.

“Never before has running a craft brewery been so challenging, and progress on these key measures will help contribute to a strong and sustainable independent brewing sector.”