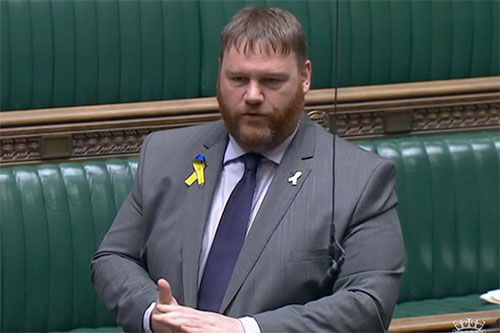 Representing constituents from service families, Owen Thompson, said the system designed to compensate injuries and mental illnesses sustained from time in service was felt to be ‘rigged’ against them, with many facing a ‘battle against bureaucracy’ to access crucial assistance.

It comes as a recent customer satisfaction survey into Veterans UK, the MOD organisation responsible for supporting the UK’s 2.4 million veterans, revealed that on a scale of 1 to 10, half gave the lowest possible score of 1 for the Armed Forces Compensation Scheme, with 87% of respondents giving scores of 5 or less.

“Throughout wars and crises, like in the recent pandemic, we’ve relied on the selflessness of our armed forces to protect our freedoms and keep us safe from harm, with many making great sacrifices to do so. Each and every one of us in the UK owes a massive debt to them all.

“It’s only right that, at the very least, we ensure they are supported in meeting the costs of illness, injuries or mental health issues that they obtained or were exacerbated during their time in service.

“When our service personnel return from combat zones and years of service, and retire from their roles in the armed forces, they shouldn’t then be expected to wage a battle against bureaucracy to obtain the support they’re rightfully entitled to.

“Dig deep enough between the cracks and anyone will find that root and branch reform is needed of Veterans UK – a system countless veterans and service personnel describe as rigged and working against them rather than for them.

“Our armed forces aren’t demanding riches. They want basic support to continue their lives and care for their families – we owe it to them to provide that support with the dignity and respect they deserve.”

You can watch the debate here on parliamentlive.tv