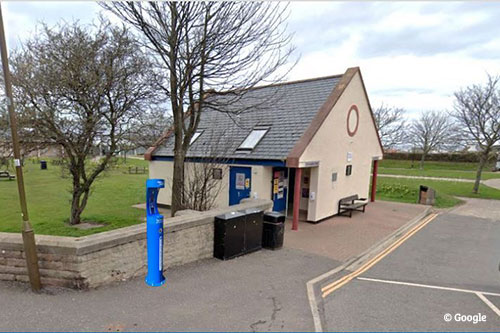 How the new Scottish Water Top Up Tap will look in Dunbar town.

Scottish Water is set to install its second water bottle refill station in an East Lothian town after planners gave it the green light.

The bright blue Top Up Tap will be put in Dunbar town centre near public toilets on Westgate.

East Lothian planners said that while the new water re-fill station would be different to other street furniture in the area, which is largely black, the rationale behind it was to make it instantly recognisable and easy to find.

They said: “Knowing that it is a Scottish Water Top Up Tap gives people confidence and trust to take water from it.”

The water company applied to install the water station in the conservation area of the town and in the Battle of Dunbar scheduled monument site.

Scottish Water welcomed the decision by planners, but said they still had additional consents to be granted because of the historic nature of the site.

A spokesperson said: “It will become the second tap in East Lothian, following North Berwick and will enable visitors and locals to refill their reusable water bottles, helping to reduce plastic waste and save people money.”

The Top up Taps are part of the company’s “Your Water Your Life” campaign, which emphasises the vital role water plays in the lives of people across Scotland.

The company aims to have 100 taps installed throughout Scotland by the end of 2023.

No objections were lodged against the plans and planner said the new station‘s benefits or people had been taken into account when deciding to grant permission.

Dunbar Community Council supported the application saying they had requested a water tap or fountain provision in the past and adding there had been positive public comments to this proposal on their social media.