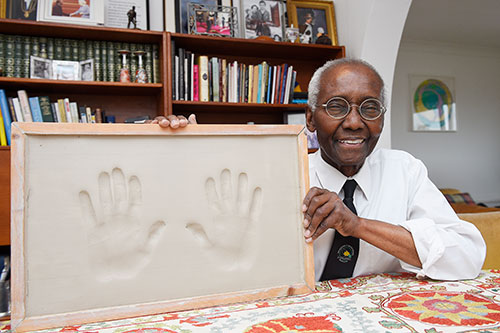 Sir Geoff Palmer has been getting ready to receive the prestigious Edinburgh Award 2022.

Impressions of the Professor Emeritus and Chancellor of Heriot-Watt University’s hands have been cast in clay ready to be carved into stone.

The handprints will be gilded and laid outside the City Chambers next to the prints of previous Edinburgh Award recipients including Alexander McCall Smith, Doddie Weir, Ann Budge, Sir Chris Hoy and Elizabeth Blackadder.

Penicuik resident Sir Geoff has a long association with the city of Edinburgh .He first arrived in the Capital in 1964 to pursue a PhD in Grain Science and Technology jointly with the then Heriot-Watt College and the University of Edinburgh. Upon completion of his doctorate in 1967 he began working at the Brewing Research Foundation where he developed the industrial process of Barley Abrasion and pioneered the use of the Scanning Electron Microscope to study cereal grains. In 1977, he returned to Heriot-Watt University as a staff member and gained a DSc degree for his research work in 1985. In 1989 he became the first black professor in Scotland and remained in Edinburgh until his retirement in 2005. In 2021 he was appointed Chancellor of Heriot-Watt University.

Sir Geoff was knighted in the 2014 New Year’s Honours for services to human rights, science, and charity. In 2018, he was appointed Jamaica’s first Honorary Consul in Scotland and is the 2020 recipient of the Jamaican national honour, the Order of Distinction (Commander Class).

Sir Geoff’s name will be inscribed onto the Edinburgh Award honour panel in the City Chambers and he will be presented with an engraved Loving Cup by the Lord Provost at a ceremony next month.

In a career spanning over fifty years, Sir Geoff Palmer has made an indelible mark on the life sciences and is a shining example to the world of Edinburgh’s academic prowess, force, and rigour.

Alongside his academic achievements Sir Geoff has been instrumental in examining Edinburgh’s past and helping us collectively move forward as a city. The Edinburgh Award will go some way towards recognising his celebrated career and I look forward to the official unveiling and ceremony next month.

This award is more than a great honour; it is a recognition of all the people whose goodness has contributed to my life and work. I arrived in Edinburgh as a research student in 1964 and I thank the City of Edinburgh Council for all it has done for the community.