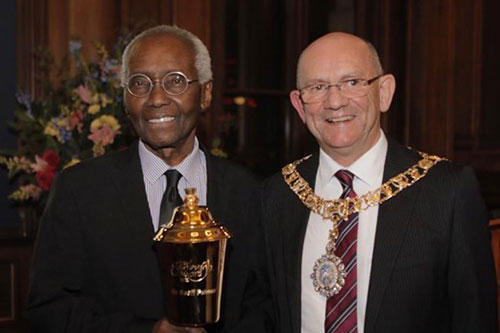 Professor Emeritus and Chancellor of Heriot-Watt University Sir Geoff Palmer has been presented with the prestigious Edinburgh Award 2022 in a ceremony at the City Chambers last night.

The coveted annual award honours an outstanding individual who has made a positive impact on the city and gained national and international recognition for Edinburgh.

Surrounded by family, friends and invited guests, Sir Geoff a Midlothian resident, received an engraved Loving Cup from Lord Provost Robert Aldridge and was reunited with a set of his handprints preserved in stone in the City Chambers quadrangle.

The Edinburgh Award celebrates Sir Geoff’s ground-breaking contributions to academia, and his indefatigable defence of human rights in Edinburgh and beyond.

Sir Geoff has a long association with the city of Edinburgh, he first arrived in the Capital in 1964 to pursue a PhD in Grain Science and Technology jointly with the then Heriot-Watt College and the University of Edinburgh. Upon completion of his doctorate in 1967 he began working at the Brewing Research Foundation where he developed the industrial process of Barley Abrasion and pioneered the use of the Scanning Electron Microscope to study cereal grains. In 1977, he returned to Heriot-Watt University as a staff member and gained a DSc degree for his research work in 1985. In 1989 he became the first black professor in Scotland and remained in Edinburgh until his retirement in 2005. In 2021 he was appointed Chancellor of Heriot-Watt University.

Sir Geoff was knighted in the 2014 New Year’s Honours for services to human rights, science, and charity. In 2018, he was appointed Jamaica’s first Honorary Consul in Scotland and is the 2020 recipient of the Jamaican national honour, the Order of Distinction (Commander Class).

Between December 2020 and June 2022, Sir Geoff chaired the independent Edinburgh Slavery and Colonialism Legacy Review Group whose work has been vital in profiling the Capital’s historic links with Slavery and Colonialism in the public realm. The findings and recommendations of the Group were endorsed unanimously by councillors on 30 August and the actions they suggest will form the basis of the Council’s continued response to these key issues.

“It’s an honour and a pleasure to present one of the Capital’s most prestigious accolades, the Edinburgh Award, to Sir Geoff Palmer.

“In a career spanning over fifty years, Sir Geoff has done much to promote Edinburgh to the world, celebrating the positive impact that higher education has on this city. His dedication and passion for the sciences, activism, and for our city as a whole – its people, its legacy and its future – is an inspiration to us all.

“I am delighted that the people of Edinburgh have acknowledged his contributions and have chosen Sir Geoff to receive the Edinburgh Award 2022, an honour which he truly deserves.

“Sir Geoff has contributed substantially to the betterment of this great city, and I am confident that his legacy both in academia and activism will live on for many years to come and his handprints immortalised in stone on our very own Edinburgh Award ‘walk of fame’.”

“This award is more than a great honour; it is a recognition of all the people whose goodness has contributed to my life and work. I arrived in Edinburgh as a research student in 1964 and I thank the City of Edinburgh Council for all it has done for the community.”

Nominations for the Edinburgh Award are invited annually from Edinburgh citizens and the awarding decision is taken by a judging panel chaired by the Lord Provost, with representatives from all political groups on the City of Edinburgh Council, Edinburgh Voluntary Organisations Council and Edinburgh Chamber of Commerce.

First launched in 2007, the Award is a way for Edinburgh residents to pay a lasting tribute to individuals who have made an outstanding contribution to the Capital through their achievements.