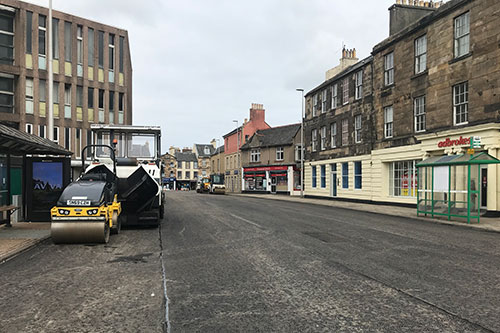 Phase 1 of the roadworks in South Street, Dalkeith, was completed last week but the road remained closed over the weekend.

Businesses, residents and drivers have been affected by the closure of South Street in Dalkeith.

Midlothian View contacted the council for an update on its completion.

‘It is being done in three phases.’

‘Phase 1; South Street from High Street to Lothian Road is complete although the road remains under a closure to facilitate phase 2.

‘Phase 2; South Street / Newmills Road from Lothian Street to Gibraltar Road started yesterday, 17th May, and is on schedule for completion by the end of this week and South Street will then be reopened to traffic.

‘Phase 3; Newmills Road from Gibraltar Road to Elmfield Park will start 24th May for around one week. This phase of the works will carried out under temporary traffic signal control. Provisional completion date is Sunday 30th May.’

Local businesses have told Midlothian View that their trade has been affected as people have stayed away from Dalkeith. Locals have are also been inconvenienced by traffic congestion. Several asked why the work was not done during lockdown.

‘Under lockdown all roads authorities were under restrictions imposed by the Scottish Roads Works Commissioner. This restricted roads maintenance to “essential works” only. This had the effect of suspending the Capital Works Programme. Once these restrictions were eased (but not lifted completely) the programme was rescheduled.’

The council were also asked why South Street remained closed from at least last Friday with no work going on and could the road not have been opened temporarily to ease the congestion that took place over the weekend?

The spokesperson for Midlothian Council said:

‘In addition there would have been considerable expense of public money in bringing the sub-contractor back in to do this work. Also historically, removal and reinstallation of closures such as this are confusing for the travelling public.”