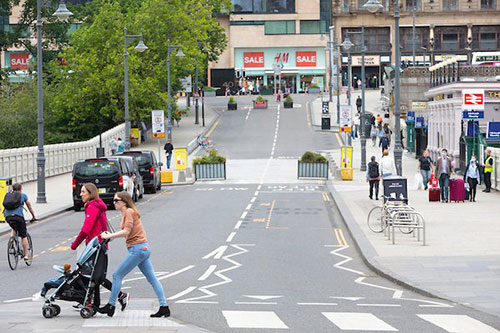 Edinburgh City Council has voted to retain its Spaces for People schemes for at least another 18 months – but will remove measures around the city’s shopping districts and ‘engage’ with residents on the controversial Lanark Road scheme.

At a full council meeting, held on Thursday June 24, the administration set out the schemes it will take forward using Experimental Traffic Regulation Orders (ETROs), which allow the council to retain Spaces for People measures for a further 18 months.

In addition, the council has decided to review the temporary cycle lanes on Lanark Road, which has encapsulated the divisive debate between motorists who want to reduce congestion and retain on-street parking, and pro-sustainable travel campaigners who want safer and greener infrastructure for cycling and walking.

Previously, council officers had recommended the ruling SNP/Labour administration keep the Spaces for People cycle lanes on Lanark Road, which have come in for criticism from residents who say the removal of the dual carriageway causes congestion, and who want to park on the street rather than on their private drives.

Residents opposed to the cycle lanes on Lanark Road also say cyclists can use the Water of Leith walkway and cycle route, but cyclists say the path is unfit for purpose, particularly in winter conditions and at night.

Against the recommendation of officers, and in response to criticism from local residents, the administration then decided it would be removing the cycle lanes, which provoked a backlash from the city’s cyclists and sustainable travel campaigners, who staged a protest on the road earlier this week.

In an apparent U-turn, the SNP/Labour administration has now delayed making a decision on the road at all, by asking council officers to once again engage with local residents and to provide a report back to the council’s transport committee in September.

The current measures were introduced using Temporary Traffic Regulation Orders (TTROs) which council officers say are used to reduce ‘specific risks’ to the public – in this case the transmission of the coronavirus.

Now, the ETROs will be used as an ‘experimenting and learning’ exercise over the next 18 months – meaning some Spaces for People schemes will have been in place three years before going through a formal legislative process.

The council says it is switching to ETROs, rather than the usual legal process where formal objections can be lodged by residents, because during the pandemic traffic and public transport levels have been incredibly low, and still haven’t recovered to pre-pandemic levels.

A Conservative Party amendment to the SNP/Labour administration’s motion asked the council to focus more on the consultation, which attracted a much larger set of consultees, the majority of which opposed Spaces for People.

It is understood council officers did not agree with this approach as they say traffic and commuter levels have not returned to pre-pandemic levels, and so the council needs more time to learn from the temporary schemes.

The administration’s motion defeated the Conservative Party’s amendment by 26 votes to 20.

Among the schemes that will now be retained using ETROs is the pedestrianisation of Waverley Bridge, Cockburn Street and Victoria Street, and the protected cycle lanes on Old Dalkeith Road, Crewe Road South, and Comiston Road.

The closures to general traffic on Cammo Walk and Silverknowes Road North will also be retained.

The majority of Spaces for People measures on shopping streets will now be removed.

These schemes were designed to facilitate social distancing during the height of the coronavirus pandemic, but impacted heavily on servicing, parking (including for disabled people) and, in some cases, bus services.

The pedestrian and cycle infrastructure on Forrest Road and George IV Bridge will also be removed.