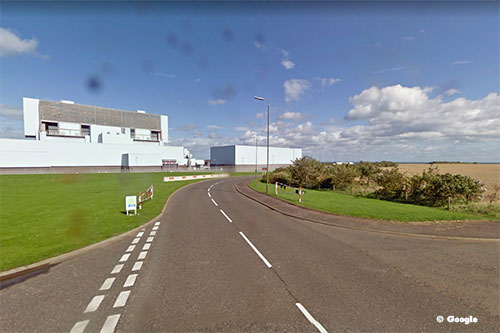 The new substation site is near to Torness Power Station.

A substation at the centre of a £1.6 billion project to create an underwater “super highway” to bring offshore energy into the UK network has been hit with a delay after plans had to be withdrawn.

SP Energy wants to create new facilities in East Lothian as part of the project which will create an Eastern Link, which the energy giant says will make the North Sea a “hidden powerhouse” of Europe.

However a planning application for the substation at Thornton Bridge, near Dunbar, has been withdrawn by the firm which had already taken it out to public consultation and submitted over 70 supporting documents to East Lothian Council.

SP Energy said changes to the design of the substation meant it would now need to be resubmitted for planning permission and the whole consultation process carried out again.

A spokesperson for SP Energy Networks said: “The planning application for the Branxton substation has been withdrawn after discussions with East Lothian Council following some changes to the substation’s design.

“We will first consult with the local community and relevant external authorities on our revised plans, before submitting a new application later in the year.”

The substation at Thornton Bridge is a key part of the latest phase of the Eastern Link along with a converter station in fields to the east of Dunbar Energy Recovery Facility and underground cables linking the network.

The Eastern Link project aims to create a connection between Torness and County Durham by 2027.

It estimates around 12km of underground cables will be required to link the new substation, converter station and landfall sites in East Lothian with 176km sub-sea cables linking Torness and County Durham sites.

Announcing plans for the new Eastern Link SP Energy said it would deliver “an underwater super-highway that would see the North Sea become the hidden power house of Europe”.

The company says the work is vital in meeting net zero greenhouse gas emissions in the future as it works with the National Grid to develop some of the longest underwater high-voltage, direct current (HVDC)inks in the world.

In its initial planning application for the substation it said: “To help meet those targets, SP Energy Networks is consulting on a vital new energy link between Scotland and England, known as the Eastern Link Project.

“To enable us to deliver this crucial project, we need to build a new substation and converter station and lay underground cables and marine cables at our preferred locations in East Lothian.”