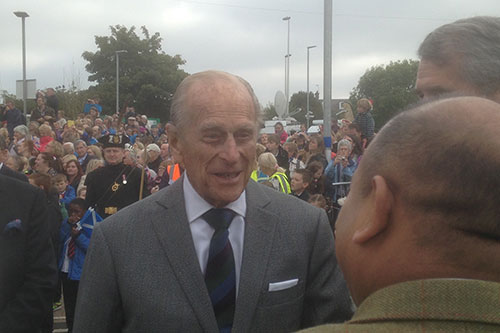 The Queen and Prince Philip visited Newtongrange in September 2015.

The Queen’s royal representative in Edinburgh, the Lord Lieutenant Frank Ross, has led tributes to the city’s Duke.

Buckingham Palace announced today that Prince Philip, the Duke of Edinburgh has died at the age of 99.

Lord Lieutenant Frank Ross, said: “Throughout Prince Philip’s extraordinary lifetime, he showed great appreciation for this city and its people.

“During his countless visits to the capital as Duke of Edinburgh, he regularly reached out to fellow veterans and serving personnel and thousands of our children and students, both through the Duke of Edinburgh Award and his longstanding links with our Universities.

“As Patron of so many Edinburgh-based charities, he won a special place in the hearts of Scottish people. It’s with great sadness that I share on behalf of the city our heartfelt sympathies and condolences to all the members of the royal family at this very sad time.

“It has been my privilege and honour to personally represent His Royal Highness in Edinburgh.

“Just like his consort to the monarch, his legacy will be longstanding.”

“It is with great sadness, that we learn of the death of His Royal Highness, Prince Philip, Duke of Edinburgh. Although we mourn the loss of such a prominent individual in British society, it is right to reflect, and celebrate, his long life, the hallmarks of which have been dedication and service to our country. He led an extraordinary and demanding life, in which he championed more than 780 charitable organisations, throughout the United Kingdom and the Commonwealth.

“The Duke of Edinburgh made two notable official visits to Midlothian – in June 1961, when he accompanied Her Majesty the Queen on a royal tour of Midlothian and in September 2015, for the official opening of the Borders Railway. On that occasion, many local people turned out to greet the Royal party and I had the privilege of introducing him to a number of local residents at Newtongrange Station. I know that he thoroughly enjoyed the occasion.

“Amongst his many successful achievements, he will be remembered for the Duke of Edinburgh Award Scheme. Since it was launched in 1956, hundreds of young people in Midlothian have taken part in the Scheme and their lives have been enriched through the experience. Many local winners of the Gold Award, received it in person from the Duke at the Palace of Holyroodhouse. The scheme continues to thrive and will form part of a wonderful legacy from a truly remarkable life.”

As the Queen’s representative in Midlothian, I will be sending a message of condolence to Her Majesty the Queen, and to the Royal Family, on behalf of the people of Midlothian.’

Provost of Midlothian Peter Smaill said: “On behalf of the people of Midlothian, I’d like to offer our sincere condolences to the Royal family after the death of HRH Prince Philip.

“I’m sure we will all take some comfort on reflecting on the last occasion Prince Philip visited Midlothian on 9 September 2015.

“He and the Queen travelled by steam train to Newtongrange to unveil a plaque marking the opening of Newtongrange Station on the Borders Railway line.

“It was an historic and joyful event, made all the more memorable as it fell on the same day the Queen became Britain’s longest-serving monarch.

“More than a thousand local people lined the platform and bridge to give the Queen and Prince Philip a warm, Midlothian welcome.

“Everyone who was there will remember how Her Majesty and Prince Philip took time to speak to local people and to share the excitement of that momentous day.

“It was a great honour to welcome the Queen and Prince Philip and we are pleased our memories of his last visit are filled with warmth.”

Chief Executive of Midlothian Council Grace Vickers said: “As a mark of respect following the death of HRH Prince Philip, the flag will be flown at half-mast at Midlothian House, Dalkeith.

“Because of the current coronavirus restrictions, it is not possible to open books of condolence in public buildings. Instead, local people who wish to can express their condolences online at www.midlothian.gov.uk/condolence.”
Prince Philip the Duke of Edinburgh, born Prince Philip of Greece and Denmark in Corfu on 10 June 1921, married Princess Elizabeth on 20 November 1947.

On the morning of their wedding, he was created the Duke of Edinburgh and was formally made a British Prince in 1957.

He remained patron, president or member of around 30 Edinburgh-based organisations, including: the Universities of Edinburgh and Heriot Watt, the Royal Botanical and Zoological Societies of Scotland, the National Galleries, Royal British Legion and the Edinburgh Chamber of Commerce and Enterprise.

He was the longest-serving consort of a reigning British monarch and the oldest ever male member of the British royal family.