Thompson calls for visa routes to be opened for Ukrainian refugees 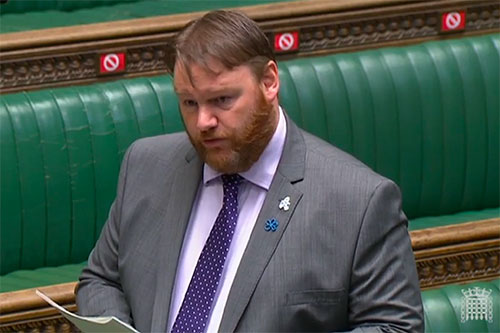 Owen Thompson MP has called for the UK Government to lift visa restrictions for refugees fleeing from the war in Ukraine.

The call comes as the UN confirmed more than 500,000 people have fled since the Russian invasion.

The EU committed to take in Ukrainian refugees for up to three years without asking them to go through the paperwork of applying for asylum first and regardless of whether they have a family connection in any EU member state, but so far this has not been matched by the UK. Instead, only limited visas for tightly defined “immediate family members” were announced by the UK Government so far.

Mr Thompson has written to the Home Secretary urging clear legal routes to be opened for Ukrainians in need of refuge.

“The invasion of a European sovereign state by Putin’s authoritarian regime is brutal and horrifying. The UK Government has stated clearly that it stands with Ukraine, but the people need to see action as strong as the words. The very least the UK can do is to open up safe legal routes to the UK for those who are fleeing this bloody war.

“I have been overwhelmed by the amount of offers of support and donations that have flooded in from the people of Midlothian to local collections for Ukrainian refugees. Clearly people are moved to do their bit, but we are being let down by this government’s inadequate humanitarian response so far.

“I urge a rethink from the Home Office and for clear resettlement routes to be opened up for our fair share of refugees.

“The weekend comment from a Home Office Minister, suggesting Ukrainians fleeing for their lives could apply for a visa to pick fruit, was beyond contempt. It shows a moral vacuum at the heart of this government.

“This war demonstrates why the UK must now end its hostile approach towards asylum seekers, instead of ramping up their inhumane policies even further. The current Nationality and Borders Bill could actually make criminals of people who have lost everything and are simply seeking asylum in the UK. This is incompatible with our international commitments to refugees and has to be stopped in its tracks.

“The connections of the Tory party to Russian dirty money are also shameful and need to finally be addressed. Inaction over the Russia report findings has quietly enabled the Russian regime and damaged our democracy. The promises now to crack down on the Kremlin cronies are welcome, but it is far too little, too late.

“I welcome the steps already announced, including the sanctions imposed on Russia, but I urge the UK Government to step up its response and make sure the UK meets its responsibility to those in need of our support. “