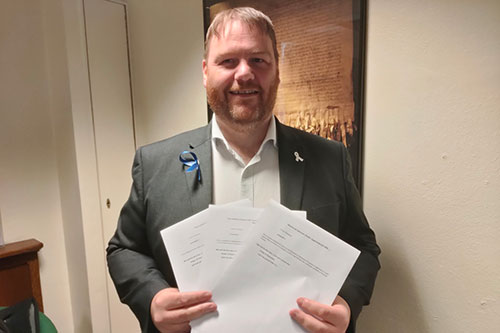 Owen Thompson MP has this week presented three new Private Members Bills in parliament, hoping to improve the benefits system for veterans, the power to sack Ministers who break the rules, and to tackle cronyism in government appointments.

The Midlothian MP has been leading campaigns on these issues and hopes introducing the Bills will help gather strong cross-party support to force the government to take action. The Bills are due for a second reading on September 16.

– The War Pension and Armed Forces Compensation Scheme (Public Inquiry) Bill – a bill to establish a public inquiry into the administration of these crucial benefits for injured veterans by Veterans UK, an arm of the MoD.

– The Ministerial Interests (Public Appointments) Bill – an updated ‘Crony Bill’ to make sure Ministers declare any personal, political or financial interests in any individual or company they give a paid public post

“These Bills are all simple, manageable steps which would a big difference in making sure government is run in the public interest, not the self-interest of people in power. They would improve life for thousands of veterans and improve aspects of the failing system at Westminster, to make sure the parliament has better checks and balances and can hold the government to account.

“It is particularly appropriate that I am introducing a Bill to set up an inquiry into Veterans UK during Armed Forces week. At a time when we come together to honour the courage of our service personnel, we need to make sure we are properly looking after our veterans too. The fact that eighty per cent of veterans said they were dissatisfied with the claims processes at Veterans UK should be a national scandal.

“The system that provides the War Pension and Armed Forces Compensation Schemes is simply not fit for purpose and needs root-and-branch reform. I led a debate where there was cross party agreement that an inquiry was needed, but the government is choosing to ignore parliament – that is why I am bringing forward a Private Members Bill. An impartial inquiry would give a voice to veterans, identify the issues and make sure the government meets its duty of care to all veterans.

“We also need to clean up the system at Westminster. Many Midlothian constituents told me they were frustrated and angry that the Prime Minister blatantly ignored the law to ban social gatherings during the Covid lockdowns. While the rest of us could not even attend the funeral of loved ones, he presided over a culture of boozy parties at Downing Street, then denied and lied about it in Parliament. The public rightly expected him to resign for breaking the law and the Ministerial Code of Conduct, but there was nothing parliament could do to force him to do the right thing. My Ministerial Code Bill would make sure the rules have greater teeth and don’t rely on decency and integrity from people like Boris Johnson who seem to serve only their own best interests.

“The third Bill is an update on my previous ‘Crony Bill’, to try and clean up the culture of cronyism that became normalised under this government during the emergency. We witnessed billions in Covid contracts being given, via a secretive VIP lane, to Tory pals and donors, by-passing all scrutiny to ensure fairness. There still remain far too few checks and balances on how this government does business, enabling corruption to fester. The Crony Bill would require Ministers to declare in parliament any connections to a company or individual who they give a public paid post. This seems a reasonable ask – if they are the right person for the job, this would simply give the Minister a chance to answer for their actions and help remove the stench of sleaze that surrounds too many public appointments.

“I will be making the case for all these changes over the coming months and hope to gather strong cross party support to take them forward.”