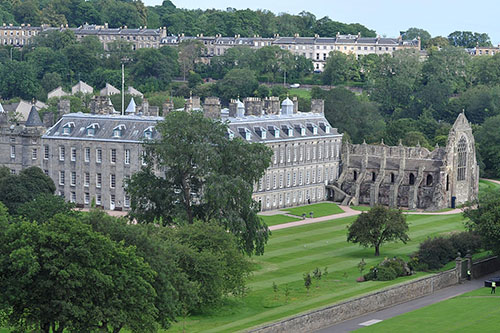 The Palace of Holyrood House.

There will be a period of national mourning following Her Majesty The Queen’s death until the State Funeral on Monday 19 September, Buckingham Palace has announced.

The Queen’s cortege is due to leave Balmoral today and arrive at the Palace of Holyroodhouse at 4pm. The King and members of the Royal Family will arrive on Monday for the Ceremony of the Keys, followed by a historic procession up the Royal Mile and a service at St Giles’ Cathedral, where the Queen will lie at rest before leaving for London late afternoon on Tuesday.

Her Majesty’s coffin will be guarded by Vigils from The Royal Company of Archers, to allow the people of Scotland to pay their respects. Members of the public who wish to do so will be able to view the coffin at rest from 5pm on Monday.

“The news of Her Majesty The Queen’s passing has been met with great sadness around the world and has been greeted with an outpouring of emotion that reflects how highly regarded she was at home and abroad.

“I’m preparing to warmly welcome King Charles and Royal family members and of course to express deepest sympathy on behalf of the city.

“The next few days will be truly historic for Edinburgh, with tens of thousands of people descending to pay their respects and millions more across the world tuning into the broadcast coverage.

“I believe Scotland can take real pride that Her Majesty cherished her time here and now the eyes of the world will be upon the Capital as we unite in national mourning and herald our new King.

“This is a time for our communities to stand together and for people to reflect on our shared history. The outpouring of grief from citizens and visitors is touching and demonstrates the special relationship the city shared with the Queen.

“Edinburgh’s Books of Condolence have been opened online, at Central Library and across the city for citizens and visitors to pay their respects.”

What to expect in Edinburgh

With the city centre already filling up with crowds of mourners, we’re urging people to plan ahead and avoid any non-essential travel on Sunday along the line of the cortege route as people pay their respects to Her Majesty The Queen.

Thousands are expected to gather along the route and anyone wishing to come along is being urged to do so safely, plan ahead and allow extra time, taking account of local and city centre road closures, weather conditions and the likelihood of spending many hours at the roadside. We will continue to update our dedicated webpages with the latest advice and road closures.

“These are sad and difficult times for us all as we mourn Her Majesty’s passing. I’m proud, however, that Edinburgh will play such a significant part in the ceremonial events taking place in the coming days and have no doubt that our beautiful Capital city will provide the perfect backdrop.

“I want to warn residents that we’re anticipating significant delays along the route as the Queen’s cortege arrives in our city tomorrow but we’re making every effort to minimise disruption. The city centre will be very busy so please plan ahead and follow the latest travel advice on the Council’s website.“We’re also urging people to please use public transport where possible. If you absolutely have to travel by car, consider using park and rides, allow extra time for your journey and only park within designated areas, respecting the needs of local residents and businesses.

“Please be aware that you may have to sit or stand for a number of hours and with limited facilities, so please prepare accordingly.”

As per mourning guidance shared by the Royal Household, floral tributes are encouraged to be left at the Palace of Holyroodhouse.

The @edintravel traffic information team will be carefully monitoring the city’s roads, sharing the latest information on disruption and diversions on Twitter.

People should also follow Lothian Buses and Edinburgh Trams to keep people informed about their services.

The @edintravel traffic information team will be carefully monitoring the city’s roads, sharing the latest information on disruption and diversions on Twitter.

People should also follow Lothian Buses and Edinburgh Trams to keep people informed about their services.