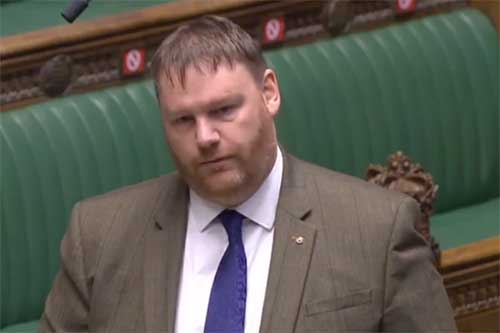 Owen Thompson MP has called for a rethink of the UK Government’s plan to raise National Insurance which he says would leave lower paid families footing the bill for social care reforms in England.

Speaking during Treasury Questions, the Midlothian MP challenged the Chief Secretary to the Treasury, Steve Barclay, to say how many members of the Cabinet spoke against the move, and whether this included the Scottish Secretary.

The rise of 1.25%, confirmed by Prime Minister Boris Johnson this afternoon, breaks a Conservative party manifesto pledge and comes on top of an income loss of £1,040 in cuts to Universal Credit which will affect almost 400,000 families in Scotland.

“The plan to hike up National Insurance is bad news for poorer households. It is a regressive tax that will hit the pockets of lower income families and young people the hardest. It’s deeply unfair that they should be expected to bear the burden for social care reforms in England.

“An NI hike will be a double blow for the thousands of households in Midlothian who are set to lose £1040 when Universal Credit is slashed. The UK already has the worst levels of poverty in north-west Europe. – but instead of taking action to tackle it, this government seems determined to make things worse.

“This chaos contrasts with the Scottish Government which has funded social care provisions from its existing budgets and is taking forward bold plans to establish a National Care Service. The Scottish Government has also invested in young people’s futures by scrapping tuition fees, protecting the Education Maintenance Allowance and introducing a range of progressive benefits including free bus travel for under 22s.

“It’s increasingly clear there is no chance of a building a fair recovery with Boris Johnson’s Conservatives in control of the purse strings. The best thing for Scotland would be to take the decisions at Holyrood as an independent country, focussed on building a strong, fair and more equal society.”