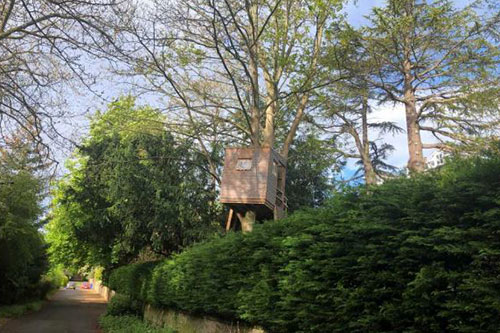 A garden treehouse in a conservation area has been saved from demolition after councillors dismissed objections saying it was “hardly high rise flats.”

The timber cabin, which has its own climbing wall entrance and overlooks a private lane, was built in a sycamore tree in the garden of a Category-B listed home in Eskbank, Dalkeith.

But it was refused planning permission by Midlothian officials after planners branded it “intrusive” and raised fears it could set a precedent for the area.

However at a meeting of the council’s Local Review Body today, councillors overturned the decision dismissing concerns over the small tree house, which they were told measures 1.75 metres by 2.28 metres.

The meeting was told Eskbank and Newbattle Community Council objected to the treehouse describing it as “visually obtrusive and not sympathetic to the Conservation Area or the Category B Listed residence.”

However, the applicant Christopher Shaw said following concerns about the timber treehouse standing out, he had stained it a darker colour to help it blend in.

Pictures of the treehouse, which was 3.6 metres above the ground, showed it is accessed both by a traditional ladder and a climbing wall.

Planners refused retrospective planning permission for the treehouse at Waverley Road, in February, ordering it to be taken down.

During the review body meeting Councillor Derek Milligan asked why no other option, such as using camouflage netting to “calm down” the impact of the treehouse on the street view, had been considered.

He was told officers felt the structure was not appropriate in the conservation area.

Mr Milligan said: “It is a treehouse someone has put up in their garden, it is not a multi-storey car park or high rise flats. I am struggling to agree with officers.”

Fellow councillor Peter Smaill added that the darkening down of the colour and foliage which already partially hid it made it less visible than he expected.

He said: “It is not particularly large and quite an interesting feature in a private lane.

“If neighbours do not like it, that is entirely subjective. I see no reason for it to be demolished.”

The review body unanimously agreed to approve the appeal and let the treehouse stay.