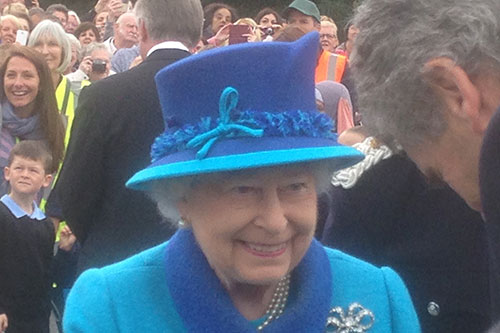 Seven years ago today, on the day she became the country’s longest serving monarch, the Queen came to Newtongrange to open the Borders Railway.

Books of condolence will be opened at Rosslyn Chapel and Crichton Collegiate Church in Midlothian as the country pays tribute to Queen Elizabeth II.

Midlothian Council has opened books in council buildings as well as the two historic churches to give as many people as possible the chance to pay their respects.

Flags across the county flew at half mast today as civic leaders and politicians paid their respects to the Queen and remembered her most recent visit to Midlothian when she and the Duke of Edinburgh opened Newtongrange Train Station in 2015.

Midlothian Provost Councillor Debbi McCall said: “Her Majesty the Queen’s death is all the more poignant, coming as it does so soon after the Platinum Jubilee celebrations earlier this year, marking her seventy years as Queen and Head of the Commonwealth.

“I know many local people will want to offer their condolences and share their memories of our highly valued monarch who remained a steadfast and constant presence during decades of change.

“We were honoured to welcome the Queen and the Duke of Edinburgh who visited several places in Midlothian during Her Majesty’s reign, most recently on 9 September 2015 when they travelled by steam train to Newtongrange to unveil the plaque marking the opening of Newtongrange Station on the Borders Railway line.

“What a momentous and historic day that was, coming as it did on the day Her Majesty became our longest reigning monarch.”

The Lord-Lieutenant, Lt Col Richard Callander said: “As Lord-Lieutenant, it has been my privilege to represent Her Majesty in Midlothian and I know that my team of Deputy Lieutenants will all share my profound sadness.

“The Queen pledged to devote her life to the service of others and she has done that faultlessly, and with utter dedication, since her coronation and throughout her entire life.

“As we mourn her death, and celebrate her wonderful life, we remember her, not only as our Queen, but as a mother, grandmother and great-grandmother and we extend our deepest condolences to the entire Royal Family.”

Christine Grahame, MSP for Midlothian recalled an occasion when she reduced the Queen to laughter as deput presiding officer of the Scottish Parliament.

She said: “I met the Queen on more than one occasion and she was charming, and had a twinkle in her eye.

“As Deputy Presiding Officer when she came to open the last Parliamentary session my duty was to escort the Duke, with my colleague Linda Fabiani.

“All had been rehearsed the day before and all went well until the last leg, the walk past local heroes. I got distracted when I spotted my own local hero, stunning in his full highland dress, jumped into the crowd for selfies with him.

“Out of nowhere Roy, in charge of the day, shouted for me. The whole royal party were waiting at the exit for me. The Duke, who had noticed my absence held out his hands.

“He asked me what had happened. I tapped them with mine and blurted out “I forgot all about you”. To Roy’s relief gales of laughter from the Queen, the Duke and the whole royal party. There’s a picture of that moment somewhere!”

Midlothian MP Owen Thompson paid tribute to Queen Elizabeth saying: “On behalf of the people of Midlothian I would like to convey my deep condolences at the passing of Her Majesty the Queen.

“As the longest reigning monarch in the UK she was a constant figure in the turbulence of our lives and someone who was deeply respected across political divides.

“She undertook her role with grace, dignity and determination and with a warmth and humility that always put people at ease.

“I know many will remember her visit to Newtongrange to open the Borders Railway in 2015, which seems like only yesterday, while others will have fond memories from the royal visit to Midlothian back in the 1960s.

“Her memory will be held in great affection by so many of us. My thoughts are with the Queen’s family now and all those closest to her at this difficult time.”

Midlothian and Musselburgh MSP Colin Beattie also paid tribute saying: “For more than 70 years, Queen Elizabeth has been a constant figure in all our lives as the longest serving monarch in UK history.

“The Queen dedicated her life to duty and service and I am sure many will share the feeling of personal loss at her passing.

“The Queen was a remarkable figure who was greatly admired and respected by all. In the coming days we will have the opportunity to reflect on her extraordinary life and we will be able to share our fond memories of the Queen.

“I would like to send my sincerest condolences to His Majesty The King, The Queen Consort and to the entire Royal Family at this difficult time. “

And Lothians MSP Miles Briggs said: “The passing of HM Queen Elizabeth II will bring deep emotions for each of us.

“For me it very much feels like the severing of a link to my grandparents who died a few years ago.

“Their generation, like Her Majesty, had come through unimaginable times with great hope and fortitude.

“A recent poll suggested that about a third of people across the United Kingdom say they had met or seen the Queen in person.
“Outside of Windsor and Deeside, the Queen and the Royal Family have been very much part of our lives across Scotland, and particularly here in Edinburgh and Lothians.
“From the garden party and the ceremony of the keys at Holyrood Palace, to the hundreds of local visits the Queen has undertaken, and her support and patronage of hundreds of local organisations and charities, our community was an important part of her life and we of hers.
“I know the love and affection the Royal Family have for Scotland, as well as the real interest they take in the well-being of all our communities.
“The Queen was a devoted public servant. A stalwart of civility, dignity, and compassion. We all owe her a great deal of gratitude for the lifelong and unstinting service she gave to our country and commonwealth.”