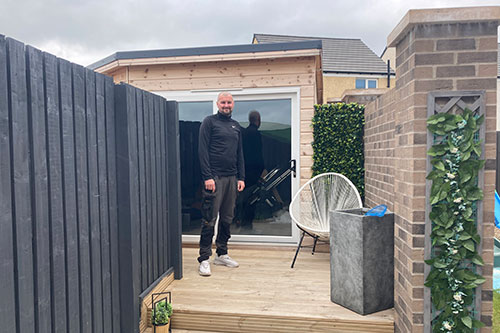 Gary Anderson has been told his summerhouse and fence has to go.

A family faces having to tear down a summerhouse created in their garden after councillors agreed that it ‘did not respect’ the surrounding housing development.

Gary Anderson and his partner Lana Cockerell spent £10,000 fencing in land at the side of their Wallyford house and creating a summerhouse in the corner.

But East Lothian Council planners told them that despite them owning the land it was classed as ‘public open space’ and they had no right to close it in or build on it.

And this afternoon the local authority’s Local Review Body backed the officers decision even though one of the members admitted the work which had been carried out was ‘quality’.

Planners had said a development plan for the estate which was produced when the houses were being built four years ago included areas of open space designed to ‘soften the landscape’.

They said: “The fence and summerhouse together with decking are inappropriate in terms of their positioning on what was an area of open public space.

“They disrupt and do not respect the design of this part of the housing estate.”

Gary and Lana, who live in the house with their three young children, argued that the land was included in their title deeds for the property and no mention of any plan for the development or open space areas was made when they bought the house.

They said in their appeal statement: “It (title deeds) does not state the land in question must be used as an open space.

“When purchasing the property we were not given a development plan detailing which areas of land were classed as open space throughout the development.

“The fence, as per the government website, meets the permitted development rules. In regards to the summerhouse, all structural requirements are met with the height of 2.5 metres not being exceeded and it being no larger than 50% of the garden.”

However at the review body Councillor John McMillan said: “Even if the applicant owns the open space, because it is open space it is required to improve the development.”

Fellow review body member Donna Collins expressed sympathy with the family but said the open space needed to be maintained.

She said: “I feel sorry for them. The work that has been done is good quality but it is going to take away from the overall look of the area.

“If everyone else started doing the samee thing we’d end up with a loss of amenity to the whole development.”