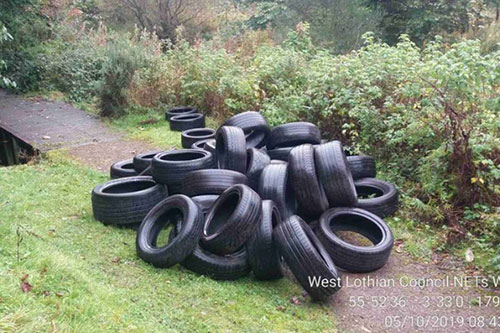 The number of fly-tipping complaints in West Lothian has plunged over the last three months, reversing years of soaring costs to tackle the problem.

The drop has left council countryside staff cautiously optimistic that their message may finally be getting through to the public in West Lothian.

In a report to Linlithgow Local Area Committee Countryside manager Andy Johnston said the figures for the second quarter of the year showed 59.8 tonnes had been collected between July and September.

That compared to almost 84 tonnes dropped during the same period last year which coincided with the gradual easing of the first lockdown. The costs to the council fell from £55,274 in 2020 to £39,406 this year.

Mr Johnston said: “It’s a positive result, and good to see. Hopefully the message is getting through to people.”

Fly-tipping has been given a greater profile in recent years because of the involvement of criminal gangs and an evolving nature of waste disposal and its escalating costs.

Additionally in West Lothian a surge in volunteer litter picking by local groups has also pushed waste disposal and the environment to the forefront of the public conscience.

The number of enquiries received between 1 July – 30 September for the Linlithgow ward was 32, out of 525 enquiries for the whole of West Lothian. That equates to 6.10% of fly tipping enquiries. Percentage-wise this would equate to an approximate cost for the ward of £2,403.79 for disposal of fly-tipping in the second quarter covering staff and vehicle costs.

Last year there were 58 enquiries in the Linlithgow ward for the second quarter, and a total of more than 600 across the county.

While going in the right direction the numbers still remain high, and clearing up fly-tipping still dominates the working day of staff – taking up 70% of time.

Linlithgow Loch and Beecraigs have been chosen as trial sites for new compacting waste bins. The bins, which are enclosed, can take far greater loads than traditional bins, and even alert the council when they are full.

West Lothian Council has approved £150,000 of additional funding for the procurement of new smart compactor litter bins. A trial of various supplier’s bins is being used to determine the preferred bin model and manufacturer.