What we are witnessing is a humanitarian catastrophe 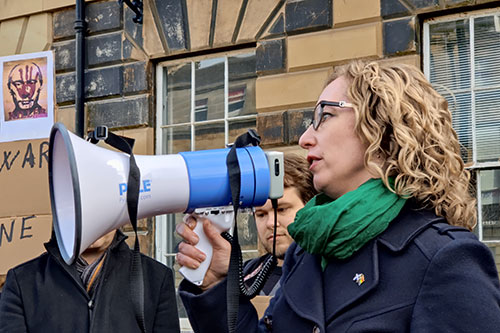 Lorna Slater MSP addressing the crowd at an Ukraine protest.

As the crisis in Ukraine intensifies, we must do all that we can to help those fleeing war and stand in solidarity with everyone who has seen their lives turned upside down by the invasion.

What we are witnessing is a humanitarian catastrophe. In the last two weeks, the Russian military has bombed towns and cities across Ukraine, killing thousands of civilians and displacing more than two million people.

It is an immoral, illegal and totally unjustified attack on Ukraine’s sovereignty. The longer that the bombing continues, the more atrocities there will be.

Like in all wars, it is civilians and the most vulnerable who are being hurt the most. Homes that were once full of memories and joy have been turned into rubble. Despite its claims to be minimising casualties, the Russian military is using cluster bombs and firing ballistic missiles and other explosives into population centres.

On Wednesday, Russian fighter jets allegedly destroyed a maternity hospital, killing at least three people and wounding many more. As I write this there are still people trapped in the wreckage. There are few acts that could be more shocking and callous.

Every day I am contacted by people who are scared, distressed and angry. Many have friends and family in Ukraine, and their situation is getting worse with every passing day. We can’t simply sit back and watch a crisis unfold. There is an imperative on all governments to act for peace.

Unfortunately, the Scottish Parliament has very limited powers in terms of what we can do to impact Putin and his regime. But we are doing all we can to push for international action and stand in solidarity with the people of Ukraine.

Last week the First Minister announced that the Scottish Government is providing at least £4 million worth of humanitarian aid and medical equipment. We have also sought urgent advice on all available options in terms of targeting individuals and organisations that are linked to Vladimir Putin’s government and have assets and connections in Scotland.

We have called on the UK government to take real action against Putin’s associates and, even more importantly, to follow the lead of European governments who have waived visa restrictions.

Some positive changes have been made, but the pace is far too slow and not enough people are being allowed in. The situation is too urgent for paperwork and bureaucracy to be prioritised over human rights. Despite having one tenth of the UK’s population, Ireland has provided safety and security to over three times as many refugees.

An entry point has been set up in Calais, but the local authorities report that over 300 people have already been turned away by British Border Force Officials.

The response is characteristic of a Home Office that has consistently failed people who are fleeing war. We saw it in their response to the crisis in Afghanistan and we are seeing it again.

The people they are turning back are refugees. Their journeys have been terrifying and arduous. They deserve our empathy and our humanity.

I want to pay tribute to the generosity of people in communities like Midlothian who have joined protests and worked to raise awareness of the crisis that is being inflicted on Ukraine. Others are fundraising for the DEC humanitarian appeal and Ukrainian-based charities.

These people are going above and beyond, and I will continue to urge the UK and other governments to do the same.

If you can, please donate to the DEC humanitarian appeal for Ukraine.