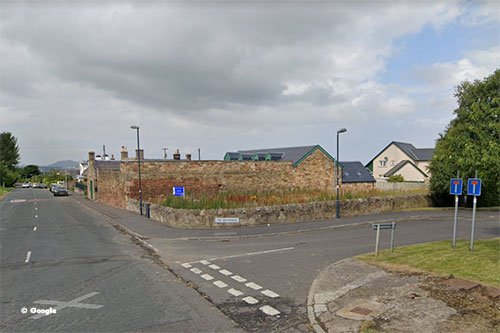 Site of proposed barn style house on the corner of The Brambles in Whitehill.

Claims building a house in the style of a barn would link it to the history of the land it was being built on were branded ‘rubbish’ by an objector whose family farmed the land for generations.

Applicant Darryll Wilson from Whitehill Farm, outside Dalkeith, already had planning permission to build a house on a corner of the land.

But he submitted an amended design which turned the original one and a half storey house into a barn-style two storey home with corrugated steel roofing and a similar style garage.

Agents for Mr Wilson told Midlothian Council planners that the new design would “strongly reflect the architectural barns (sheds) of the locality”.

They said: “The current owner of the site feels that there should be more reference to the location’s historic past, namely its agricultural past.

“It also felt that in aesthetic terms there should be a stronger contemporary architectural statement.”

However planners received nine objections to the amended design with one local residents telling planners “Saying he feels that there should be more reference to the location’s historic past, namely its agricultural past is rubbish.”

The man, who said his father and grandfather farmed in Midlothian all their lives added: “I have never seen a farmhouse in this part of the world that looks like this design.”

Planners said that while the proposed barn-style of the house could be suitable in rural areas or near a group of farm buildings, the site at Whitehill farm had changed in character due to a number of houses being built there.

They said: “The agricultural design approach is not suitable or appropriate for this suburban location on the edge of Whitehill.”

And they added: “Even if the design approach as acceptable, the planning authority has concerns over the design quality of the house, which is detached, large and two storey.

“This is an unsuccessful attempt at this barn aesthetic, resulting in a large, bulky building with unusual proportions. The design is not of sufficiently high quality to make a positive contribution to the surrounding area.”

The planning application was refused for having a detrimental impact on the character and amenity of the surrounding houses and lacking amenity for its own new tenants.

The planning application can be viewed on the Midlothian Council Planning portal HERE.