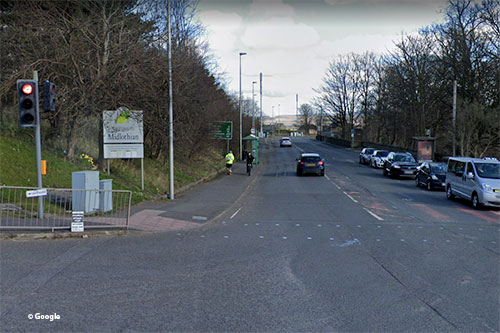 The Midlothian - Edinburgh border on the A7 at Danderhall.

Edinburgh residents who drive into Midlothian should be charged in ‘retaliation’ for any congestion charge introduce by the city’s council, candidates for the local elections have been told.

Anger over Edinburgh SNP’s manifesto which aims to introduce a fee to people who drive into the Capital and do not live there, was vented by members of the public at a hustings in Dalkeith.

Local residents asked candidates for their views on the proposal, with one calling on them to commit to introducing their own charge.

And when Provost Peter Smaill pointed out that 95,000 journeys were made by Midlothian residents into Edinburgh each week, compared to just 47,000 journeys involving Edinburgh residents one member of the audience said “charge them double”.

It was the topic of a surcharge being introduced by Edinburgh council which would only apply to people who live outwith the city and drive in which sparked most debate.

Mr Smaill, who is hoping to keep his seat in the ward, recalled a bid in 2005 by Edinburgh to introduce a two tier congestion charge which would have seen some city residents who lived further away from its centre than residents in parts of Midlothian, exempt from charges.

The city council was taken to court over the plans and eventually – after a referendum found two-thirds of people opposed to it – the charge plans were scrapped.

Mr Smaill told the hustings: “If you take a place like Danderhall which is far closer to the city centre, then anyone from Danderhall will be paying £2 or £3 every time they cross the boundary

“Meanwhile Edinburgh people will be privileged so they can leave and indeed 47,000 a day make that outward journey and will not have to pay at all so it is hugely discriminatory, very unfair. It is going to be quite undemocratic and will harm the economic viability of Midlothian and bureaucratise our lives.”

Bill Kerr Smith, who is standing for the Scottish Greens cautioned that the charge was still at a proposal stage.

He said: “At the moment it is a proposal, it reports what they want to do and is not telling us what they plan to do to mitigate it. For example, for every congestion charge paid the driver could be given a family ticket to use on the bus.”

And Stuart McKenzie, SNP, who is also a sitting councillor restanding for his seat said when asked if he agreed with the city charge “maybe”.

Mr McKenzie told the church hall hustings: “We all love the convenience of cars but we need to have a balance. We have to recognise there is an issue and if there is an issue here (in Midlothian) then it is worse in Edinburgh.

Fellow SNP candidate Ann Montague added: “Although we can see the need to keep cars off the roads and encourage people on to buses, we have to ask how do we do that?”

One member of the audience asked the candidate: “If this charge came into existence would it be fair and reasonable for Midlothian to tax residents of Edinburgh who come into Midlothian and use that money to support transport links.”

And when told the number of journeys into Midlothian were half that of those going into Edinburgh he suggested the charge should be double to raise equal funds.

In a show of hands however, none of the candidates supported the proposal.