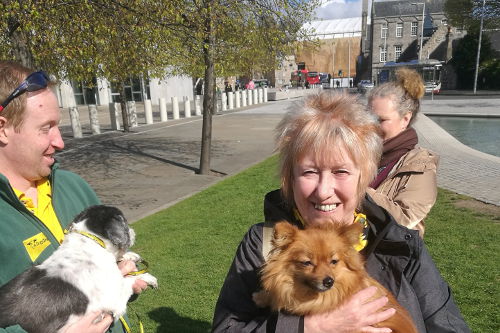 A pre-Covid-19 photograph of Christine Grahame.


Midlothian View Holyrood Challenge: This View has been written by Christine Grahame, the Scottish National Party's candidate in the Midlothian South, Tweeddale & Lauderdale constituency for the Scottish Elections on Thursday May 6th 2021

At the age of ten, I watched a beautiful large black Labrador running around with some children in the small park opposite our council house. I found out that it was a stray (there weren’t many dogs refuges in those days). I begged my mother to let us have it but she was adamant there was to be no dog in the Grahame household.

A family two doors up took it in, but as the days passed, I saw that all they did was open their door and let it run free. Soon its exuberance and size meant that it was sometimes overexcited and what had been fun was edging into scary behaviour. I told my mum over and over of my concerns till finally exasperated she told me to phone the SSPCA if I was so bothered. I did. They checked and told me it was fine it was well fed etc etc. I knew that it was well fed, it was the fact that it was running wild that bothered me.

Weeks later that poor dog was put down for biting a child. I never forgot that as you can tell so it’s probably no surprise that I have spent my years in the Scottish Parliament also campaigning on animal welfare issues: against fox hunting, glue traps, snares, shock collars, stink pits, hare coursing and puppy factory farms to name a few. I have chaired the Parliament’s X Party Group on Animal Welfare, I am a member of the SSPCA , Edinburgh Cat & Dog Home and the RSPB . I brought forward my own bill: the Control of Dogs (Scotland) Act 2010 which puts the blame and the responsibilities on the owner not the dog.

Yes a good bit of me is still that ten-year-old who has never forgotten that bonny back Labrador.