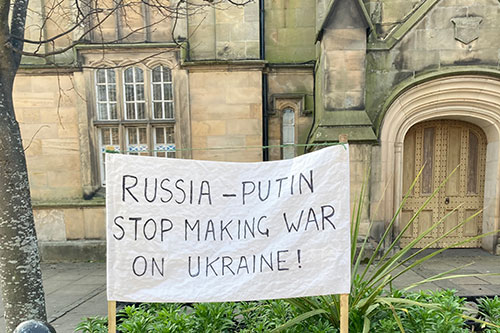 Fears that Ukrainian families who have fled to East Lothian could end up on the council’s homeless list have been raised by officials.

One family who came to the county under one of the host schemes set up to provide a safe escape from Russia’s war on their country has already presented to the local authority as homeless after the placement failed.

And a report to councillors has warned there is a “significant concern” the number of families this happens to will “rise quickly” as more arrive.

The report said families are likely to present as homeless if “the family accommodation available is not of an appropriate size, previously agreed sponsorship commitments break down, accommodation commitment has exceeded 6 months and the host no longer wishes or is able to continue or where retrospective checks identified post occupancy deem either the hosts or the properties unsuitable.”

The local authority has 37 hosts who have signed up either through the UK Homes for Ukraine scheme or the Scottish Super Sponsor scheme.

Both schemes require a level of council checks and registration with disclosure checks on hosts and physical inspections of the properties, many of which are being done retrospectively.

A third scheme which allows Ukrainians with family already settled in the UK to come to the county does not require council involvement so the numbers arriving through it are not logged.

The report updating elected members on the Ukraine support in the county warned that the council’s homeless waiting lists were already under pressure and demand is so high the council still relies on “unsuitable accommodation”.

It said: “Despite the delivery of substantial new affordable homes and high levels of housing allocations to homeless households, waiting times for rehousing can be significant depending on individual requirements and as a result, the length of time spent in temporary accommodation generally is considerable, impacting adversely upon the overall flow through the system and further restricting the ability of the council to respond to need and demand.

“The Housing Options Team have already received one homeless presentation from a Ukrainian family and there is significant concern that this will begin to rise quickly.”

It is understood that through the two council supported schemes five children are among those who have already arrived in East Lothian.

The report said nine families arrived in the county between April 9 and April 26 with a further eight due to have arrived by last weekend.

The rest of the hosts are expected to welcome their families this month with delays put down to passports / visas.

Data from the host households revealed that 41% were couples, 28% single people with the remaining 31% families with three or more people.

It added: “The majority of hosts are located in the East including Dunbar, North Berwick, Gullane, Aberlady, Direlton, and East Linton with a small number in the West.”

A Ukraine mailbox has been set up by the council for people who want to offer accommodation and has received around 170 enquiries since it was launched on April 14.

People can get in touch via the email address ukraine@eastlothian.gov.uk