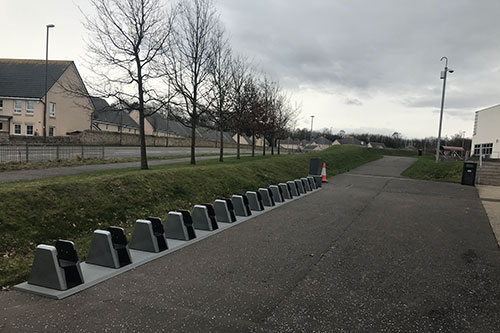 ‘Mindless thugs’ have been blamed for a decision to introduce a £100 deposit to a publicly funded e-bike hire scheme.

Operators of the pilot GO e-bikes project introduced the hefty deposit at the weekend – four months after the scheme’s launch in East Lothian and Midlothian.

The scheme, which allows people to hire an e-bike from hubs in Musselburgh, Dalkeith and Eskbank for as little as £2 for 30 minutes, was hailed as the latest move to encourage “everyday functional trips” without cars.

However incidents involving the expensive bikes being damaged or dumped saw operators introduce the deposit “to help make sure the bikes are not misused”.

Not long after the hub at Musselburgh railway station was launched there were reports of an e-bike and dock being vandalised and a number of e-bikes have been reportedly found abandoned across the countryside – with reports of four being recovered from Port Seton harbour in one afternoon.

Concerns have been raised that the three-figure payment which users are told will be returned to their bank “in a few days” after they’ve returned the bike, will make them inaccessible to those on low income.

Midlothian Council leader Derek Milligan has said he hopes the £100 deposit will be temporary, with operators promising to review it’s success.

But Midlothian Councillor Colin Cassidy, who saw a hub established in his Dalkeith ward, supported the deposit saying the levels of vandalism seen since the scheme launched had shown how easily “abusers” can obtain the bikes.

He said: “The refundable deposit, in my view, should act as a deterrent to the mindless thugs who keep vandalising and abusing these machines.

“The company tried to treat this project in a civilised and open manner, unfortunately there are those in our community who have not yet evolved to the level of civility required to meet this trust.”

Introduced by South East of Scotland Transport Partnership (SEStran) in April hubs in Mussselburgh, Dalkeith and at Edinburgh College, Eskbank, were launched offering people the chance to hire the e-bikes from as little as £2 or a 30 minute journey and a monthly pass of £10.

SEStran said the scheme was awarded £208,000 funding as part of the Low Carbon Travel and Transport Challenge Fund established by Transport Scotland.

The scheme aims to “enable everyday functional journeys to be taken by walking, cycling and public transport and to support an increased proportion on ultra-low emission vehicles on Scotland’s roads.

Councillor Milligan expressed concern about the high cost of the deposit.

He said: “We want to do all we can to encourage people to get out and about on bikes and travel actively. So while we’re fully supportive of the Go e-bike initiative, we are concerned the £100 refundable deposit is so expensive, it’s actually a deterrent to a large majority of local people using the bikes.

“We understand that SEStran has introduced a security deposit on the GO e-Bike scheme to discourage misuse, including vandalism and abandonment, and that a similar solution worked well at a sister project, Forth Bike.

“We’ve been assured the decision will be reviewed in coming weeks to see if the misuse has stopped or reduced and to give them time to make sure all the bikes are back in circulation.

“We are hopeful the £100 refundable deposit is a temporary measure and that the cost at least reduces substantially as to make it affordable after the review, ends altogether and/or alternative measures are put in place to make sure the scheme can be accessed by everyone in our communities, regardless of income.

“In the meantime though, I’d remind everyone to please use the bikes responsibly as the actions of a minority are penalising the majority of local people who want to enjoy the benefits of this initiative.”

In Musselburgh, where there are two hubs at the railway station and Brunton Hall, councillor Katie Mackie described the deposit as “prohibitive”.

She said: “I think this amount of deposit is prohibitively expensive and could deter people from using these bikes and in the process undermine the entire initiative.”

Fellow Musselburgh ward councillor John Williamson said: “The GO e-Bike initiative is a great way of making it easier for people to make journeys by bike and hiring them is easy using an app on your phone.

“The bikes are expensive and I can understand why a user deposit of £100 is being introduced. People will tend to look after the bikes better if they might be liable for any damage caused through misuse.

“I hope, however, that such a deposit scheme does not mean that people on lower incomes are excluded from being able to use the bikes.”

And fellow councillor Stuart Currie said: ““It’s a bit disappointing to introduce a deposit scheme given the need to encourage more use.

“However I’ve seen a number of these bikes abandoned in other areas of East Lothian and so that may well be a contributing factor.”

As the e-bikes are returned to the dock at the end of the hire by the user and there is no one there to check the e-bike when it is returned the deposit is essentially a deposit for non-return of the e-bike rather than damage to it.

A spokesperson for SESTRAN said:

“Each ride can be tracked by the system and where there is an issue with a bike that means a bike cannot be returned to a dock, the user needs to inform Customer Services and use the secondary lock. While the bikes are not checked on return the maintenance team regularly inspect the docks and fleet of bikes. The deposit is held for the duration of the membership pass purchased and then returned to the user’s bank.”

“We have applied this measure in the short term to deter misuse and will review it in due course to ensure that the system is fully accessible to all users.”