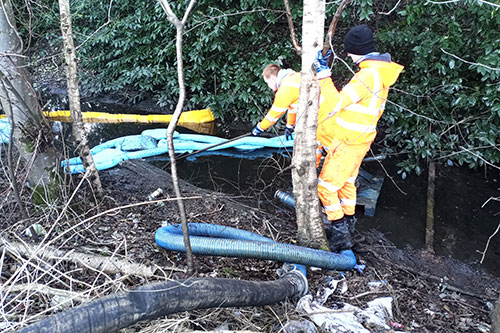 Contractors have now brought in additional equipment to try and siphon off as much of the waste as possible. Photo credit Chris London member of the Facebook group Friends of The River Esk.

Specialists tackling pollution in the River Esk in East Lothian have brought in a tanker to try and remove the waste.

Environmental experts have been using booms to contain the contamination since it was first spotted last Friday by local countryside rangers.

But six days on contractors brought in by East Lothian Council have now brought in the additional equipment to try and siphon off as much of the waste as possible.

The nature of the contamination, which was traced to a manhole leak, has not been revealed by environment agency SEPA who are leading an investigation into the leak.

Local residents who raised concerns about the sudden appearance of a mixture of brown sludge and an ‘oil-like’ slick reported a strong smell of petrol coming from the waterway over the weekend.

The Esk is a popular home to swans and geese and several birds have been taken to the Scottish SPCA wildlife centre for treatment after becoming covered in the contamination.

The local authority has warned dog owners to to keep their pets out of river as well as issuing warnings to local anglers.

Environment agency SEPA has urged anyone with information about the spill, which has been traced to a manhole which leaked contaminated materials into the water, to contact Crimestoppers as the investigation into the incident continues.

The council said that while the tanker would remove as much of the leaked material as possible it was likely evidence of the pollution would remain in the water.

A spokesperson said: “It may take time to dissipate with some water discolouration and odour still being evident. However, this has reduced as the week has progressed.”

They added that “SEPA is unable to comment further at this stage given the matter is a live investigation and due to the potential for enforcement or criminal action.”

Anyone concerned about wildlife on the river can contact the SSPCA helpline on 03000 999 999.