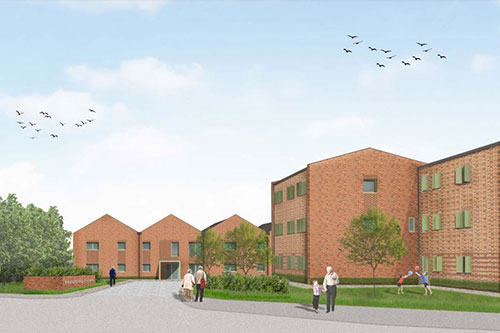 An artist's impression of new flats planned for Danderhall.

The site of a former library and leisure centre is set to be turned into flats under plans lodged by Midlothian Council with its planners.

The local authority wants to build 23 flats in two and three-storey buildings on the site of the Danderhall buildings which were demolished when facilities moved into a new community school.

The plans set out a Passivhaus approach to the new homes which will be designed to be energy efficient. They are described as one of a “new batch of low energy social housing”.

In a design statement with the application agents for the local authority said: “The aspiration of the project is to provide high quality, sympathetic design, rooted in the local community.”

The leisure centre and library were demolished after the new £16.7m Danderhall Primary School and Early Learning Centre opened last year with facilities moved into the community building.

A play park beside the building was left standing and will be given a redesign as part of the plans for the new flats.

The plans say that while there will be a “minor relocation and reorientation” of the play space it will be retained to benefit the wider community at the site on Newton Church Road.

They add: “The play area will still benefit from natural surveillance from the surrounding housing and this will be improved with the inclusion of the new residential units and formal path network.

“The play space equipment has been modernised to improve accessibility and inclusivity and has been designed by a play provider that has experience of delivering play schemes for Midlothian Council.”

The plans are available to view on the Midlothian planning portal HERE.