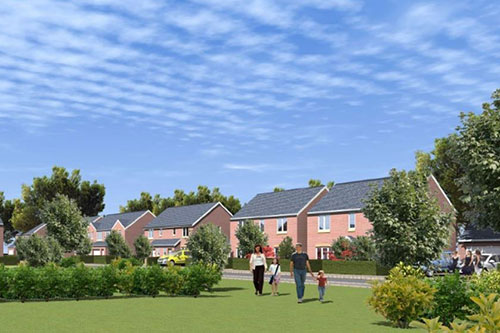 A streetscape from Persimmon Homes East Scotland of how new housing at Gorebridge could look.

Concern over a lack of school places has delayed a decision over a new housing estate after it was revealed plans for a new school had been delayed.

Midlothian councillors were asked to grant permission for 96 new homes on the edge of Gorebridge, on land which has been earmarked for housing in their own local plan for nearly 20 years.

But at a meeting of the planning committee today concerns about over-stretched schools and delays to additional facilities saw councillors defer a decision.

Midlothian South Councillor Douglas Bowen, who is part of the SNP administration, told the meeting that young people in the community attended three different secondary schools.

He said: “Having attended community council meetings in Gorebridge and Newtongrange I know how much it is on people’s minds and I know how stretched the schools are.

“The children in Gorebridge are already split between three high schools and that is a major concern in the community.

“I would like to know with more certainty how these children are going to be educated.”

Peter Arnsdorf, the council’s chief officer place, said there would be a ‘timelag’ between planning permission being granted and the first child moving onto the estate and needing a school place.

And he said that because the site had been identified for housing since 2003 the numbers of school places that would be required had been included in future education plans since them.

However Councillor Bowen described estimating school numbers was a “bit of a crystal ball situation.”

He said: “There seems to be huge pressure on the schools and I am not aware of any solution, particularly for high school children.

“A high school in Gorebridge was supposed to be built by 2025 but it has been postponed and goodness knows when it might happen.”

Council leader Kelly Parry called for the decision over the housing application by Persimmon Homes East Scotland for the land at River Gore Road, to be deferred until more details of the education situation could be investigated.

She told the committee a review of school catchment areas was being carried out and a paper due to be presented at the next full council meeting.

And she pointed out 69 objections to the housing had been lodged with the council by local residents.

She said: “It is my understanding there will be a catchment review paper at the next full council meeting and I am really concerned around the amount of objections from the community around education and other issues.

Councillors were warned there was a risk the developer could appeal to Scottish Ministers to step in by claiming non determination but Mr Arnsdorf said in this case the developer and council had been working together and expressed hope an extension would be acceptable.

Councillor Willie McEwen urged the committee to grant planning permission for the houses pointing out the land had been allocated for residential development for nearly 20 years.

He said: “It is a pre allocated site and there has been no breaches of planning so I’d be minded to grant it.”

The committee voted by nine members to six to defer the decision.