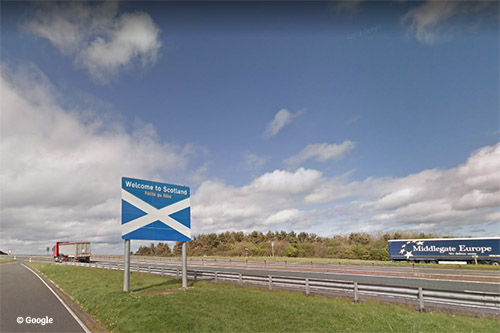 The prospect of a hard border has alarmed community leaders either side of the Scotland/England dividing line, with one councillor warning of ‘border guards in sentry boxes’ and barbed wire being used to stop crossings.

The upcoming Holyrood elections, and possible future independence referendum, have once again thrust the issue of a hard border into the spotlight, with the potential for an independent Scotland to rejoin the EU raising concerns along the border region.

The SNP has long said that ‘borders are not our policy’, but recently a report, published by the Institute for Government think tank, found that in the event of an independent Scotland rejoining the EU, it would become a customs and regulatory border for the EU and as a result would need to close the border with England.

When pressed on the issue, First Minister Nicola Sturgeon told the BBC’s Andrew Marr that that cross trade business would not suffer because of a border, but EU regulations set out that 30% of poultry, eggs, milk and fish, as well as 100% of live animals, need to be inspected when entering the single market.

Before the pandemic, around 59,000 vehicles crossed the border each day at the M6, A1, A7 and A68 crossings, according to Transport Scotland.

However, in the border region there are a myriad of ancient border crossings and no infrastructure in place for customs checks, leading to a mix of dismay and disbelief among politicians in the region.

“In a nutshell, I think creating a hard border between us would be absolutely life changing for businesses, tourism, trade and families,” said Glen Sanderson, the Conservative leader of Northumberland County Council.

“Having a border with guards in sentry boxes is bad enough but how would the rest of a hard border be policed? Barbed wire fences along the length of it?

“The border is just a line on a map. Businesses and families in Northumberland trade and travel freely now – the enormity of disruption and difficulties that would be caused are difficult to imagine.

“Livestock farmers regularly trade every day between England and Scotland and tariffs if applied would wreck much of their livelihoods – quite unnecessarily.

The Labour leader of Cumbria County Council, Stewart Young, who previously said ‘you’d have to build something like the Berlin Wall to close the border’, added: “The border between Northern Ireland and Ireland is a bit like the England/Scotland border – there’s the main crossing points but there’s also a myriad of back roads and little ways of crossing over, which makes it very difficult to police.

“It’s a very long border, and most of it goes through very sparsely populated areas – it would be virtually impossible to stop individuals from crossing it in small vehicles.

“The mass movement of goods in large lorries – there’s a limit to the crossings they could use – but the M6/A74 would have to be a major customs point. The other main roads, the A7, the A1, etc., would need infrastructure as well.

“It would be very very costly and virtually impossible to seal the border completely.”

Many of the thousands who cross the border each day do so for work, particularly on the M6/A74 crossing between Cumbria and Drumfries and Galloway, where the two large hospitals, the Cumberland Infirmary and Dumfries and Galloway Royal Infirmary, draw in large workforces from the area.

Retail is also a big employer for people living either side of the border.

“The Gretna Gateway [shopping centre] has been a huge source of employment for people in the Gretna and Annan area, as well as in Carlisle,” said Elaine Murray, the Labour leader of Dumfries and Galloway Council.

“And again, the difficulties that a hard border would bring would be a disaster for them.

“I’m not sure how people would get to work – they might have to have their passports out everytime they go to work.

“I’m aware the SNP may not want a hard border, but we’ve seen the problem we’ve had with Northern Ireland and the border in the Irish Sea at the moment.

“If Scotland did become independent and join the EU – and there’s a question mark over when that could happen as they’d have to tackle their high deficit to join – it would then be up to the EU to decide, not Scotland, what sort of border it had with England, between the EU and the rest of the United Kingdom.”

A spokesperson for the SNP said: “No one in the SNP is proposing a hard border.

“Free movement of people will continue after independence thanks to the Common Travel Area encompassing the UK and Ireland, which long predates the EU – so the reality is that independence will mean far more freedom of movement than now, with the ability to move freely across both the rest of the UK and 27 other EU nations.

“It is the UK Tory government which has thrown up barriers with Boris Johnson’s disastrous, jobs-destroying hard Brexit taking us out of a market seven times bigger than the UK.

“Both votes SNP on May 6th will put Scotland’s future in our own hands, not Boris Johnson’s.”

Shona Haslam, the Conservative leader of Scottish Borders Council, and a Scottish parliamentary candidate for Midlothian South, Tweeddale and Lauderdale, said: “Emma Harper said there would be a hard border, so it’s untrue to suggest the SNP are not saying that, and Nicola Sturgeon a few days ago said she was recognising there would have to be a border.

“It would be a hard border too – they would be two separate countries, the SNP say we would be using a different currency, we would have a different bank, different passports – and they can’t have it both ways.

“The SNP are great at sugar coating things, they’re great at avoiding the hard questions – but they need to start coming up with the hard answers.

“They can’t dodge it and go around it all the time. What currency would we use? What economic model would we use? And there’s been zero answers from them.”