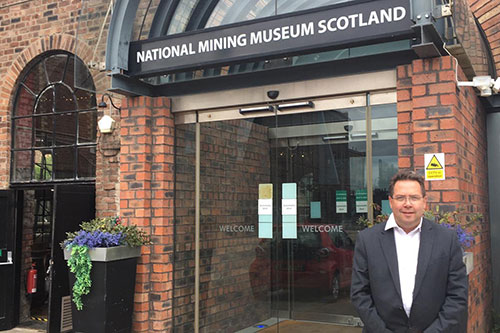 Craig Hoy, MSP, outside the National Mining Museum in Newtongrange.

Local MSP Craig Hoy has welcomed the announcement of the National Mining Museum in Newtongrange as the Midlothian Climate Beacon for the COP26 summit.

Climate Beacons for COP26, led by Creative Carbon Scotland, is a Scotland-wide collaborative project between climate change or environmental organisations and arts, heritage or cultural groups.

In a motion to the Scottish Parliament, which was supported by a number of MSPs, Mr Hoy welcomed the announcement – and congratulated the museum of its phased reopening, which starts on June 17.

“News that the National Mining Museum is to be part of COP26 is great news for Newtongrange as Midlothian welcomes visitors as it takes one more step out of lockdown.

“The Climate Beacons project is one of many opportunities for Scotland which has developed out of the UK Government’s decision to host COP26 in Scotland.

“COP26 is a massive opportunity for the world to challenge climate change and I am glad that Midlothian is getting an opportunity to play its part.”

The Midlothian Beacon will create a transformative journey, following the flow of water, from Scotland’s past legacy of fossil fuels towards a future of decarbonisation, connecting local and international cultures through art and science.