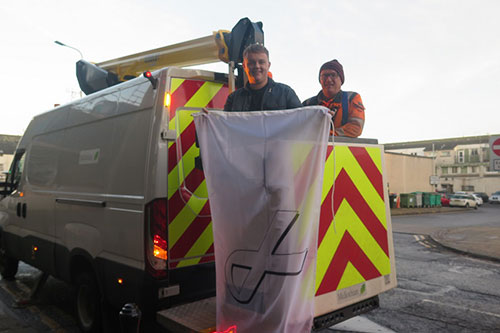 Depute Provost McManus, on left, is pictured in the cherry picker with Ian Sandilands of the council's roads team before the flag was put up outside Midlothian House.

Cllr McManus is the council’s White Ribbon campaign champion, a Scotland-wide initiative to encourage men to end violence against women.

Cllr McManus, who is also the council’s Equalities Champion, said:

“It’s an honour to see the flag flying outside Midlothian House today on the start of 16 Days of Activism, a symbolic reminder to never commit, condone or remain silent about men’s violence against women.”

Cllr McManus is encouraging men in Midlothian to take the White Ribbon Pledge:

“I pledge never to commit, condone or remain silent about men’s violence against women.”

He is also working with Police Scotland in Midlothian, White Ribbon Scotland and other local organisations to set up a local White Ribbon steering group.

“While most men in Scotland are not violent towards women, we can’t afford to turn a blind eye.

“The sooner we can establish a steering group, with representatives from relevant partner organisations including Police Scotland, the sooner we can work together to tackle this abhorrent issue.”

Find out more about 16 Days of Activism in Midlothian by CLICKING HERE.