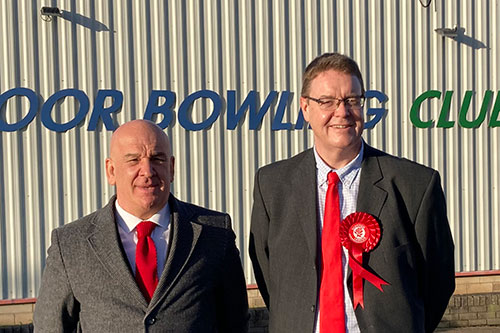 Scottish Labour have won a decisive council by-election victory as it was claimed Conservative voters stayed away from polling stations.

The East Lothian Council by-election was sparked by the death of council leader Willie Innes, a Labour stalwart, who died in office last October.

And the outcome, a win for Labour candidate Colin Yorkston, was hailed as a tribute to Mr Innes and the voters who backed his legacy.

Turnout at the Preston, Seton Gosford ward was just 31.4% – compared to 51 percent at the last local authority election in 2017.

The count took just over an hour and a half as only 4,653 valid votes were tallied at Meadowmill Sports Centre this morning.

And the final results appeared to show a swing from the Scottish Conservative votes to the SNP who saw their percentage grow by almost 10% since the council elections five years ago.

In 2017 Mr Innes took 24.3% of the vote with Scottish Conservative candidate Lachlan Bruce running a close second with 24.1% of the votes.

Today’s polls saw Scottish Labour take 38% of the vote with the SNP candidate Janis Wilson taking nearly 26% – up from 16% in 2017 – and the Scottish Conservatives coming in third with just over 24%.

Only 4,696 votes were counted out of an electorate of just under 15,000 – in 2017, 7,397 valid ballots were returned. East Lothian MSP Martin Whitfield said the turnout had been a tribute to the former council leader as well as a no-show for the Conservatives, as reports of boozy parties held in Downing Street during lockdown led to repeated calls for Prime Minister Boris Johnson to resign over his handling of the issue.

He said: “The feedback at the polling stations was that the Conservative voters simply stayed at home.

“I am delighted by the result which is a tribute to Willie Innes and the people of Preston Seton Gosford who supported his values and legacy.”

The council issued 3,641 postal vote papers for the by-election and said 63% had been returned meaning more than half the final tally came via the post.

Mr Yorkston, a 55-year-old teacher who works at Holyrood High School, is originally from Prestonpans and lives in the town with his family.

A fellow founding member of the Preston Lodge High School’s Learning Foundation alongside Mr Innes, he said he looked forward to continuing the former council leader’s passionate support of education and opportunities for young people in the county.

He said: “I am obviously delighted by the result. I have a huge interest in education and improving the life choices for youngsters and that is something Willie was passionate about. I will be looking to carry that on.

“Willie set a very high standard and I will strive to continue it.”

East Lothian Conservative MSP Craig Hoy flatly rejected any suggestion the Tory vote was down saying the Scottish Conservatives were the only major party to see their vote share rise.

Pointing to Ballot Box Scotland figures which looked at the overall votes for all candidates at the 2017 election when four seats were up for grabs he said both Labour and the SNP had seen their percentage fall.

He said: “Labour and the SNP saw their overall percentage of the vote fall, whereas the Scottish Conservatives saw an increase in our vote share.

“This is a significant achievement in the present circumstances and a tribute to a great local candidate and a strong local campaign.

“It also underlines the hard work that Douglas Ross and his team are engaged in to ensure we become the real alternative to the SNP. Meanwhile Labour and the SNP are going backwards in East Lothian.”

In the 2017 election Labour fielded three candidates, while the SNP put forward two and the Conservatives just one for the four seats.