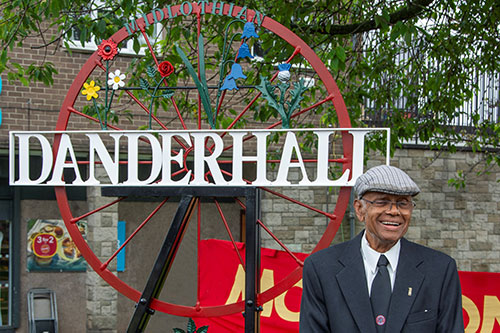 The oldest surviving miner in a Midlothian village has unveiled a new welcome sign paying tribute to its mining heritage.

Former Monktonhall Colliery miner Jack Smythe, 91, was invited to launch the gateway sign for Danderhall which was created using a pit wheel and shaft.

Funded by Midlothian Council, the sign is the first of three being made for the community after calls from Danderhall and District Guerilla Gardeners.

The campaign group was initially established to take over the maintenance of public land after the local authority reintroduced the use of glyphosate weedkiller sparking concern about its safety.

However the group’s work led to the discovery of an old colliery wall which had been lost in undergrowth and has sparked renewed interest in the community’s history.

And at the weekend Mr Smythe, who still lives in Danderhall with his son, unveiled the gateway sign at the entrance into Danderhall watched by representatives of the Retired Miners Union, including former MP Sir David Hamilton, and the community.

Helen Graham, from the Guerilla Gardeners, said Mr Smythe had been delighted to be asked to unveil the sign admitting it was an emotional moment.

She said: “We all shed a tear at this ever lasting gift to our beautiful community.

“It was a lovely morning, and something for the next generations to appreciate and remember from where they came.”

Helen said the sign was designed by Derek Flynn and son to capture the green shoots coming out of the shafts to symbolise the growing community as the new development of Shawfair, next to Danderhall builds on top of the old pits.

She said the guerilla gardeners helped choose the flowers symbolising the community at the top of the sign, including “bluebells that grew wild around Woolmet pit and amongst the fields at Shawfair.”

Similar signs will be installed in the coming weeks at The Wisp entrance to Danderhall and at Newton Village.

The discovery of the old buffer wall which is believed to have been part of an old rail link between Edmonstone Colliery and the landowner’s estate, earlier this year attracted the interest of the Coalfield Regeneration Trust.

The guerillas were also inspired to research the history of the mine where nearly 200 years ago nine men and four women were trapped after the shaft collapsed.

It took 36 hours for rescuers to get to them and, despite fears the noxious air would have already killed them, they all survived.

Their research and work with a local historian is now being compiled into a book telling the story of the gardening group and the old colliery wall as well as the lives of some of those who worked in the mines centuries ago.