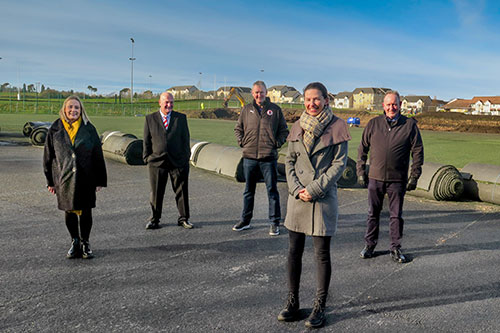 Councillor Milligan said the project “would never have got off the ground” without significant funding from developer contributions and support from external agencies, such as the national agency for sport in Scotland, sportscotland, the Scottish Football Partnership, which supports grassroots football clubs, and local youth football club, Bonnyrigg Rose Community Football Club. Poltonhall is the home ground to over 600 Bonnyrigg Rose youth players between the ages of 5 and 20 year olds as well as the over 50s walking football groups.

He said: “As a council we recognise the vital health and wellbeing benefits projects like this bring, but we don’t have the money to deliver them ourselves and without external funding and collaboration, this upgrading work would never have got off the ground. A huge thank you to all of the funding and support agencies, including the local community football club , the Scottish FA and local developers. The partnership working has been fantastic.”

The £650k project sees sportscotland investing £100,000 of National Lottery money. Bonnyrigg Rose raised £50,000 and secured further funding of £20,000 for LED floodlighting from the Scottish Football Partnership. The remainder is from the council from the developer contributions. The Scottish FA is working with sportscotland to support the project.

Members of the public will be able to book both the pitches and pavilion when open thanks to a booking system designed by Midlothian based Web and App development company PigeonPenguin.com. The system also enables Bonnyrigg Rose Community Football Club to manage the details of all their players, coaches and volunteers via their website bonnyriggrose.org.uk.

Stewart Harris, Chief Executive, sportscotland, said: “Bonnyrigg Rose has established a real community club for boys and girls from 5yrs to 20yrs of age, offering so much more than football. The club not only provides opportunities for everyone to take part in sport and physical activity, but also plays a key role in the life of the community through social inclusion and mental health initiatives. That’s why we have invested £100,000 of National Lottery funding in this project to expand the pitches and allow even more people in the local area to benefit.”

Bonnyrigg Rose manager Jim Wilson said: “The club has worked tirelessly since taking on the pavilion in 2016 under a lease agreement with the council to make the resurfacing and extension of Poltonhall happen.

“In real terms the club has made a near £70,000 investment in the pavilion since taking it over in August 2016 creating 10 employees in the process.

“In the last year alone the club has gained funding to allow us to invest over £30,000 in our Mental Health programme including social inclusion groups for the elderly and 121 counselling sessions for over 40 individuals who couldn’t access the support they needed at that time elsewhere.

“Without all stakeholders and each and every person buying into our project and beliefs it wouldn’t have been possible.”

“I’m excited to see the development of Poltonhall Recreation Ground getting under way as the completed project will have such a positive impact on the local community. Bonnyrigg Rose Community Football Club are at the heart of the community and provide opportunities both on and off the pitch. The completion of this site will allow them to continue the great projects they already deliver and develop further opportunities to support the physical and mental wellbeing of their local community.”

Stuart McCaffrey, the Chief Operating Officer of The Scottish Football Partnership, said: “The Scottish Football Partnership Trust was keen to be part of a multi-agency approach to delivering first class and inclusive facilities for Bonnyrigg Rose Community Football Club. Our investment in new LED floodlights at Poltonhall will help to reduce energy consumption and costs at the same time as adding to a more environmentally friendly and sustainable future for the club.”