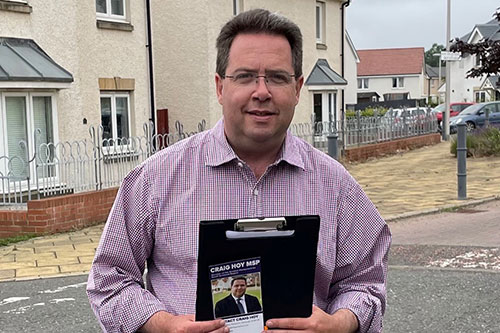 I grew up in Midlothian in the 1980s and every time I visit an area I have not been to for a while I am struck by how many new houses there are.

Midlothian is the fastest growing area in Scotland and this trend is set to continue over the coming years.

While it is fantastic that so many people are choosing to settle locally, it is also very important that quality of life is maintained both for those who live here and those who are moving into the area.

I recently met with residents in Gorebridge where a new secondary school and hundreds of new houses are planned to be developed. Many local people who I spoke to are concerned with the pace of development and the failure to invest in the infrastructure required to cope with the planned increase in new houses in and around the village.

These same issues are evident throughout Midlothian.

The new development at Shawfair is going to be very significant and that will mean some big infrastructure challenges there.

While councils are effective in getting developers to contribute towards new schools and amenities, such as play parks, big ticket investments, including roads, are being neglected.

Take Sheriffhall Roundabout, which now faces an extended public inquiry because of pressure from the Greens. As a result, this vital transport hub may not be expanded and upgraded until 2026 or 2027 at the earliest. We can only imagine how congested the roundabout and approaching roads will be by then.

Along the City bypass, at Straiton for example, junctions are simply not capable of coping with the increased traffic.

The delay and neglect of investment is simply unacceptable.

Since I was elected, I have been advocating for a planning and development policy of “infrastructure first”. This means that schools, healthcare, road, rail and community facilities are expanded before – or at the very least during the construction of – new housing. It’s simply not feasible to start thinking about what is required after thousands of people have already moved into an area.

This is something I have pressed Midlothian Council to address, but the real action and investment needs to come at a regional and national level.

And that’s where the Scottish Government must raise its game.

The SNP Government is in the driving seat when it comes to deciding where and how many new homes are built in Scotland. But the system will fall apart very soon unless they address the big issues, such as road capacity, before further development takes place.

I worry that Midlothian could very soon grind to a halt unless Scottish ministers act.