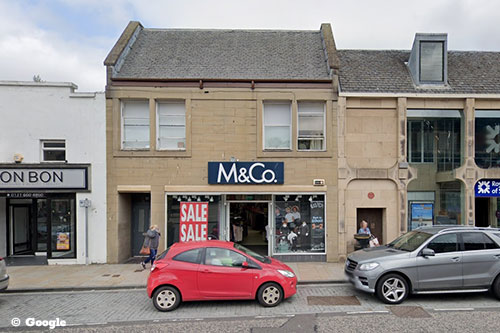 A bid to turn a shop storeroom into two flats in Dalkeith High Street was rejected after its attempt to create outdoor space for the new tenants were branded “seriously poor”.

Midlothian Council’s planning officers rejected the proposal by Edinburgh-based Northfield Capital Ltd after it included no garden space or parking for the new homes.

And it described a “lightwell” designed into the building to create natural light for the flats as not enough to make up for the lack of garden or window views.

Applicants said the lightwell would “allow the apartments to gain considerable natural light to all habitable rooms and with the incorporation of planting will provide a shared external amenity”.

However refusing planning permission for the flats, planning officers said the windows for the new flats would overlook each other and criticised a lack of “outward facing windows”.

They said: “It is also noted that the use of the lightwell as one of the main sources of natural light to the properties leads there to be a lack of outward facing windows serving the dwellings, particularly proposed apartment two which is not served by any other windows other than those facing into the proposed lightwell.

“The standard of amenity associated with the development is not sufficiently high so as to mitigate against the lack of garden ground.

“With regards to standards of residential amenity the proposed development is very poor and accommodation of this level of amenity should not be
encouraged.”

Planners rejected the proposals for the storage area above M&Co on the town’s High Street in April, ruling the proposed flats did not “benefit from adequate usable amenity space, would have a poor outlook and seriously poor levels of amenity”.

The applicants appealed to Scottish Ministers pointing out two other flats have been allowed to be built in the same building in the past, without garden space.

However the appeal was this week dismissed after it was ruled it would have to go before the council’s own Local Review Body for a decision and did not fall into Scottish Ministers’ remit.