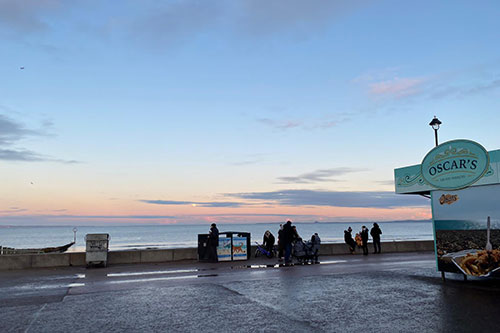 Temporary toilets are set to be installed on the Meadows and in Portobello, to combat the public urination and defecation witnessed during the recent sunny weather.

Politicians such as Alex Orr, who lives near the Meadows and is standing on the Lothian regional list as an SNP candidate in the upcoming Holyrood elections, and Daniel Johnson, Scottish Labour candidate for Edinburgh Southern, have raised concerns about ‘scenes of violence, anti-social behaviour and urinating/defecating in neighbouring streets’.

Edinburgh City Council and Police Scotland have since launched a ‘Meadows action plan’ – including a dedicated policing operation, a council surveillance van and park ranger patrols – to deal with the antisocial behaviour and violence.

Now, the council is planning to combat the public urination and defecation by spending £450,000 on temporary public toilets at Portobello beach and on the Meadows.

In his monthly address to councillors, SNP council leader and Leith councillor Adam McVey said: “With the weather warming up and lockdown easing, we recognise the need for greater public toilet provision so that residents and visitors can spend longer enjoying our beautiful parks, beaches and open spaces.

“I’m pleased, then, that we’ve agreed a £450,000 plan for temporary public toilets in busy ‘hotspot’ areas, including the Meadows and Portobello, to help people enjoy them more and help deal with some of the antisocial behaviour that’s impacted on our residents. We’re asking elected members to approve funding for this at next week’s council meeting (29 April).

“The reports of people using gardens as toilets are unacceptable and I really hope that having these additional facilities will help put a stop to that. If agreed, a list of the exact locations will be publicised as soon as we have it.

“We’ll make sure the temporary toilets meet accessibility needs, too.

“We’ve also reviewed permanent provision and a plan for new and improved facilities across Edinburgh is also proposed.

“There are currently seven public toilets open in busy areas and we’ll reopen more as soon as we possibly can.”

Edinburgh City Council is also looking to secure £5m of funding to revamp its public toilets network – including gender neutral facilities and contactless payment technology that would ‘allow charging to be considered’.

A report, approved by councillors on Thursday, examined the city’s future provision of public toilets as it emerges from lockdown.

The report highlighted toilets in the capital that are no longer fit for purpose, and where there are gaps in provision – including at the council’s ‘premier parks’, at high-visitor locations such as Portobello beach and the Pentland Hills, and in Edinburgh’s official town centres.

The council has now agreed to invest in 15 of its current public toilets, and to close the toilets in Colinton, as this facility ‘does not align with proposed plans for future provision’.

“As we ease out of lockdown over the next few months outdoor recreation and meetings will become even more important for people, particularly during spells of warmer weather.

“We recognise that an increased number of public toilets is going to be needed to allow residents and visitors to stay longer to enjoy our beautiful parks, beaches and other open spaces.

“There have been reports of people toileting in and around these areas and I really hope that providing additional temporary facilities, if funding is approved, helps to put a stop to that.

Councillor Karen Doran, Labour’s environment vice-convener, said: “We’re very proud of our beautiful parks and beaches, which are particularly busy during periods of warmer weather and I’m really pleased we’ve managed to find funding, which now just needs to be approved, to help ease the situation with more people meeting and exercising outdoors.

“To make our stunning city even more welcoming and accessible, we’ll try to find the funding we need to allow us to initially focus on improving facilities in premier parks on a permanent basis.

“We’re already planning for ‘hubs’ in our town centres as part of ’20 minute communities’ and accessible, clean modern toilets as part of these ‘hubs’ is the best solution for local provision going forward.”