“The lovely giant of a man Doddie Weir” 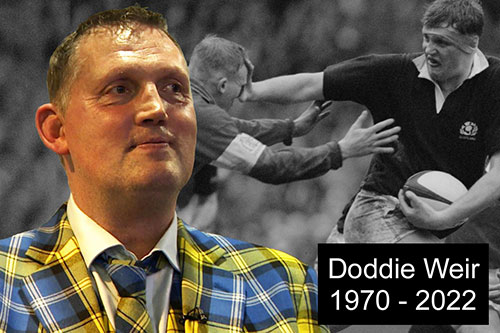 Some forty years ago I visited a sick colleague who told me she had been diagnosed with motor neuron disease. These were of course the years pre internet, google and so on. I had no idea what it meant for her, and I suspect neither did she. Treatment, or managing this awful disease was pretty basic. I recall she was at one point surviving on Complan and later a friend adapted an old-fashioned scent spray so she could try to swallow. During my years in Parliament, I also met brave people and their families as they faced the horrible deterioration which follows MND. This all came back to me with the many, too many, high-profile sportsmen now suffering from MND, so keeping it in the public eye.

Which brings me to the lovely giant of a man Doddie Weir whom I also met at Parliament. Capped 61 times for playing in the National Team he was diagnosed with MND in 2016. When he came to Parliament to highlight MND, he was still able to walk and stand and his speech was clear. What he faced up to in public with the support of his family goes beyond admiration.

MND is a slow death sentence where the victim can see exactly what will happen and how. Doddie with others has made sure we all now know about this appalling disease, and that by his and others’ activities, millions has been raised to try to find a treatment which will halt this slow death and even a cure. He alone raised over £10 million. His distinctive tartan was designed in 2018 by him in collaboration with Berwickshire-based clothes firm ScotlandShop, in a bid to raise cash for the “My Name’5 Doddie Foundation.” The tartan features colours from the teams he played for: black and yellow of Melrose, blue and white of Scotland, and black of the former and white of the latter are also intended as a reference to his seven years with Newcastle Falcons. It is officially registered on the Scottish Register of Tartans, reference: 12047.

In January 2020 he confirmed his participation in a clinical trial aimed at finding drugs that could slow, stop or reverse the progression of MND. He encouraged people with a diagnosis of MND to enrol in the MND-Smart programme which would trial new drugs, existing drugs and a placebo.

But let us remember even as we send condolences to his wife, children and extended family and friends, that smile, that bright tartan suit, the courage indeed of him and his family, in particular his wife Kathy, the millions he raised along with awareness, and trust that before long, MND will be treatable. Forty years on from my friend, life has been made a little more comfortable for those with MND but life expectancy after diagnosis has hardly moved.